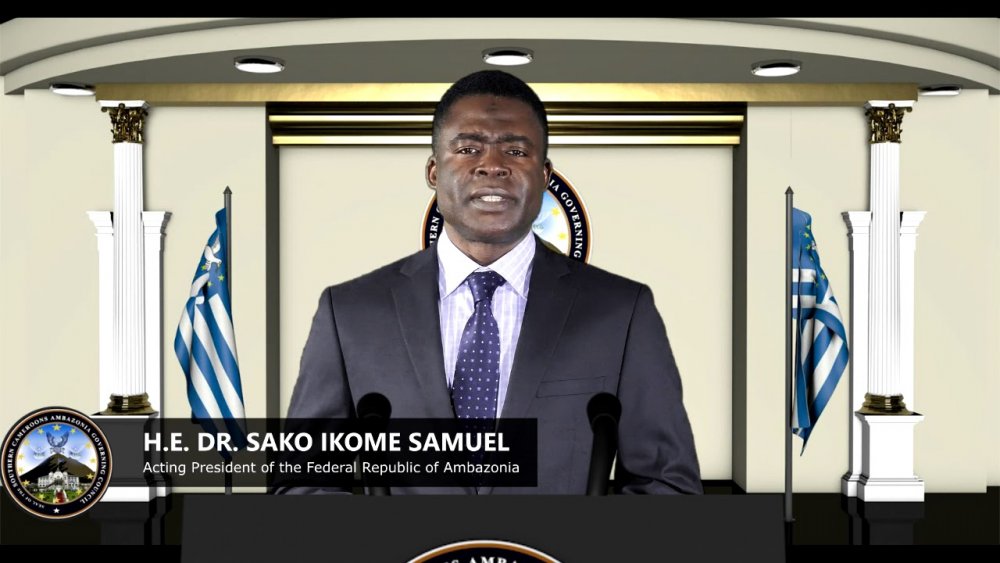 Sam Sako Ekome, self-styled President of the self-declared region of Ambazonia (in Cameroon) has denied any ties with Nigeria's outlawed Indigenous People of Biafra (IPOB).

Ekome made the declaration at a virtual press briefing recently. The briefing had key members of 'his cabinet' in attendance. He explained that the issue before the Ambazonian state was more of annexation and occupation, not secession as is the case with Nnamdi Kanu-led IPOB group which is seeking a Biafra nation.

Sako Ekome stated that the last time any citizen of Ambazonia was in any way linked to the people of Eastern Nigeria was as far back as 1953, and would be wrong to link them now in any way to IPOB.

Furthermore, Sako Ekome alleged that the people of Southern Cameroon (Ambazonia) have been stuck fighting an existential war since 2017 when its interim government was unlawfully tried and sentenced to life imprisonment, following their calls for dialogue with French Cameroon. He explained that Ambazonia was not trying to secede as being misinterpreted by many in Nigeria and beyond, and that theirs is already a sovereign state.

“If it is true that we joined Cameroon, it means we attained independence. We have co-existed this long with Cameroon, but if the union has become problematic, does Southern Cameroon lose its independence as a result? The answer is no. If it is agreed that our union with Cameroon was not a treaty union as contemplated by the United Nations charter, why are we obliged to remain in a de facto union where we have been treated as slaves for the last 60 years?” he asked rhetorically.

He alleged that all they requested was a dialogue that resulted in the war they are fighting today.

“French Cameroon declared war on us in 2017 because we asked for genuine dialogue about the foundation of this failed experiment. Instead of engaging us in dialogue as is prescribed by the United Nations Human Rights court in Banjul, Gambia, they declared a brutal war on us.

“Nigeria is our neighbour and the giant of Africa, and I would like investigations done to substantiate these claims. We have 1.6 million internally displaced persons in Nigeria.

"By the last count in 2020, United Nations High Commissioner for Refugees (UNHCR) records indicate that 83,000 Ambazonian refugees have been registered.”

'Gubernatorial Election In Anambra Will Be Embarrassingly Transparent'– INEC