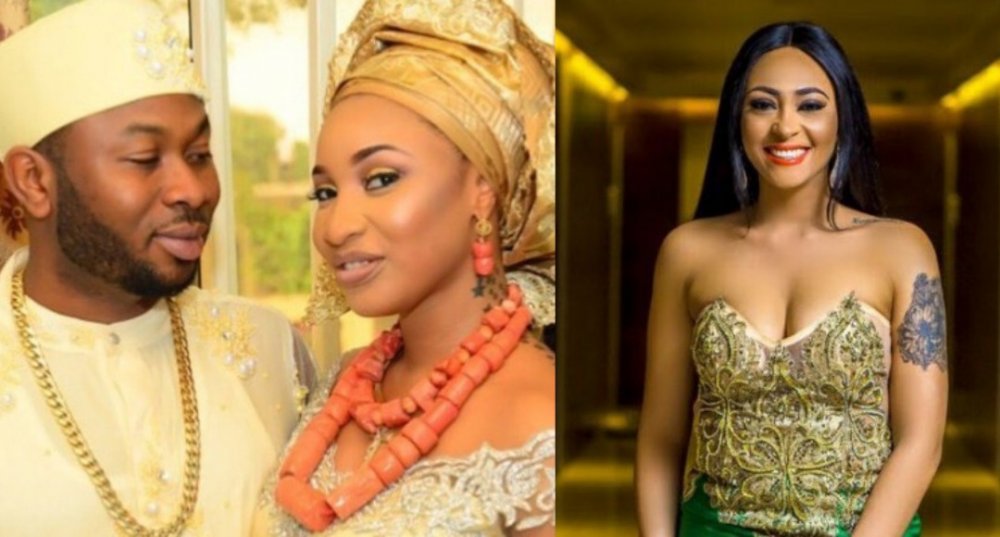 Olakunle Churchill, the ex-husband of Nigerian actress, Tonto Dikeh, has set social media on fire with his birthday message to Nollywood actress, Rosaline Meurer, which described her as his wife.

Recall that Meurer was at the centre of Dikeh and Churchill’s messy breakup in 2017. Dikeh had called her out and accused her of having an affair with her ex-husband. In response, Meurer claimed the relationship she had with Churchill was more like a sibling relationship. She added that accusing her of sleeping with Churchill was like saying she sleeps with her brother.

WATCH: This was when Lady reveals that Tonto Dike's ex-husband, Churchill was her mentor

Dikeh maintained that Meurer and Churchill’s relationship was not just a mere affair but a full-fledged relationship.

However, it appears Dikeh has been vindicated going by Churchill’s message in celebration of Meurer’s birthday where he addressed her as Mrs Churchill.

Trust Twitter users to do the most. It did not take long before Tonto started trending on the Micro-blogging app. See some opinions on the issue.

“Churchill is like a brother to me”
“He’s my best friend”
“Tonto is just making all of these up” pic.twitter.com/gUMjJ8Ouj7

Tonto Dike swore the man was cheating on her with this babe while Tonto and the man were married and they called her a mad drug addict.
Now it’s ‘Mrs Churchill’ ? https://t.co/aaIIhYFZy2

If he has a bestie, focus on yourself baby girl. Dont dull like Tonto

Men will do everything to drive you crazy and then turn around to call you mad. See Tonto now

Tonto Dikeh was right all these while. But she divorced Churchill, talmbout him being a 40 seconds man and shii, just to spite him. Now he has moved on with Rosy Meurer. All is fair in love & war. Side chics be like "what God can't do doesn't exist"
P.S: Women are scum. pic.twitter.com/7ICe4NfpBQ

Tonto Dikeh has been vindicated after all, my bestie, my bestie. Lmao ?

Tonto Dikeh's ex-husband, Olakunle Churchill introduces actress Rosy Meurer who was at the center of their divorce as his wife. Boom ?? pic.twitter.com/kEROJ9axrf

Anita Idibia, Eniolabadmus, Ndijeka and Co, Y'all called Tonto delusional, called her mad and all sorts of names, made her your enemy. But she knew what she was saying. Her instincts about this wicked two goats was so true. The bastards are tired of hiding and denying. pic.twitter.com/QOTrypN4Qj

They made Tonto dikeh seem crazy

She even had to start her plastic surgery journey

Made her a laughing stock

This Tonto Dikeh gist validates what I have always kept in mind.

"Avoid 3rd parties in your relationship"

No matter who the person is to you.

Tonto wasn’t crazy! Women just hate each other for real... why though? Why? pic.twitter.com/u9ojtKhXfx

You see that calm instinct of yours always alerting you when something is wrong?
Trust it for Ur own sanity sake.

They called Tonto crazy,drug addict etc
Imagine she took her life for such humiliation ?

I'm glad u're better, not perfect but positive.
You're a Queen Tonto? pic.twitter.com/0hvU8ZGjHj

Rosy Meurer called Tonto Dikeh’s ex-husband Churchill "my brother" and he also called her "my sister" but it turns out they were doing things.

No matter how much you trust someone, never believe that "this person is like a brother or sister to me" lies.

Recall that during a live chat with the publisher of Ovation magazine, Dele Momodu, in 2020, Dikeh said forgiveness is necessary for one’s growth and as such, she has forgiven her ex-husband.