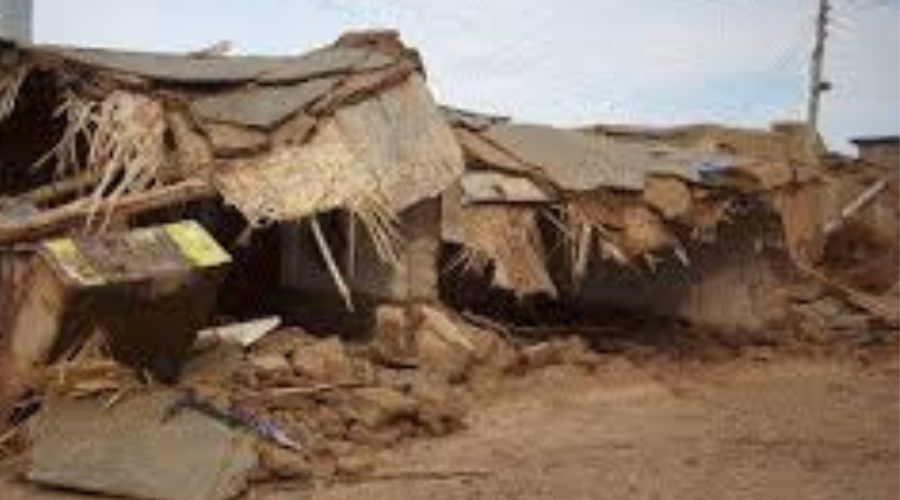 Mud houses were among those destroyed by this year's rain.

A building that collapsed in Gwaram Local Government Area of Jigawa State has killed a 45-year-old house wife while her husband sustained injuries.

Spokesman of the Nigeria Security and Civil Defence Corps (NSCDC) in the state, CSC Adamu Shehu confirmed the incident in Dutse on Tuesday.

Shehu said the incident occurred on Sunday at about 11:30 p.m., as a result of heavy downpour recorded in the area.

“One Talatu Shehu, aged 45, a housewife at Auyakawa quarters in Gwaram LGA lost her life as the building in which she was sleeping together with her husband collapsed.

“The incident occurred on Sunday, Sept. 4, 2022 at about 11:30 p.m.,  following a downpour which led to the collapsed of the building while the couple were asleep,” he said.

He said the husband, Shehu Na’Allah, 60, survived the incidence and is currently receiving treatment at a hospital, while the remains of the wife has been handed over to her family for burial.

According to him, the rain which lasted for many hours caused havoc destroying several mud houses in the area.

Shehu said the command’s disaster management personnel had evacuated residents whose houses were on the brink of collapse.