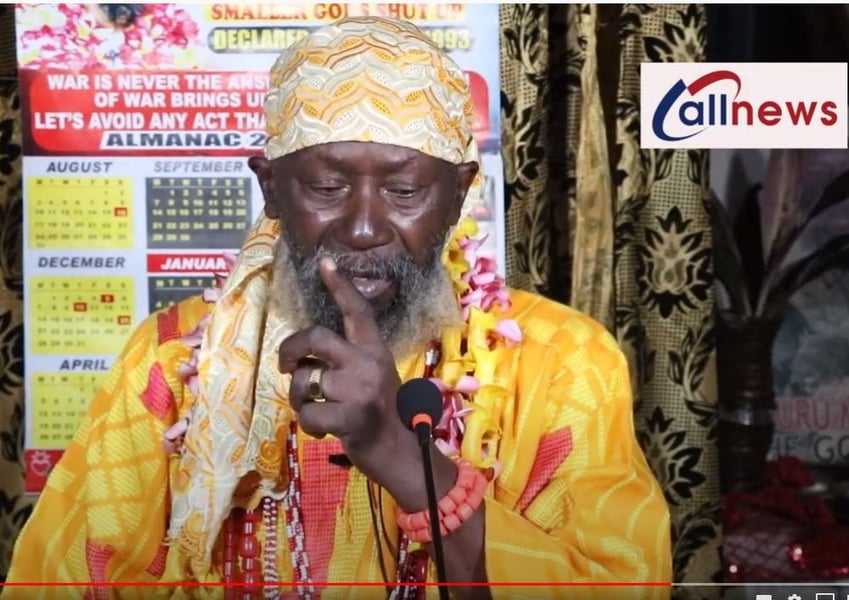 Asocial media critic identified as John Obuchi has lashed out at the founder of One Love Family, Satguru Maharaj Ji, over the recent attack on Leader Of INRI Evangelical Spiritual Church, Primate Elijah Ayodele.

In a report cited earlier today, Satguru Maharaj Ji described Primate Ayodele as a serial liar and neo-colonialist being used by Oyinbos (foreigners) to cause confusion through dangerous Northerners like Kaduna State Governor Nasir El-Rufai, fiery Islamic preacher Sheikh Gunmi and others due to his prophecy on the chances of a Yoruba presidency in 2023.

Primate Ayodele had in a statement revealed that the chances of Yoruba presidency in Nigerian come 2023 is shaking due to the seed of disunity that has been sown into the race.

Apparently, while making a case for the Yorubas, Guru Maharaj Ji took a swipe at Primate Ayodele by calling him unprintable names.

Though Ayodele has not responded, John Obuchi reacted by describing Guru Maharaj Ji as a pig who is already dirty, warning him to desist from attacking true men of God like Primate Ayodele.

"I found it really appalling that an obsolete Sat Guru Maharaj Ji has the audacity to speak against a highly respected man of God, Primate Elijah Ayodele for giving a prophetic insight on the 2023 presidential election.

"When we talk of influential and valuable Nigerians, there is no way Guru Maharaji will emerge in the list even if it is a one-million man list simply because there is nothing he has added to his immediate community, the country, his family, his church rather than constitute nuisance, create confusion and engage in serious occult activities that has rendered him useless even to himself.

"The sight of Guru Maharaji alone makes people flee, not because they are scared of him but they see him as a mentally-derailed man who wears red clothes all around, carries an unkempt beard, unwashed body and satanic attires wherever he goes.

"He is not just someone worth listening to, a one-year-old is even wiser than Guru Maharaji who claims he is a ‘god’.

"This unfortunate Guru even organized a press conference just to say Primate Ayodele is being used by ‘Oyinbos’ to cause confusion in Nigeria.

Where did Guru Maharaj Ji get money to organize a press conference? He is definitely being bankrolled and the desperation to ensure he gets money to eat tomorrow morning and it has led him to accept the offer to attack Primate Ayodele but unfortunately, he has failed.

"When Guru Maharaj Ji started his ministry, some heads of states reckoned with him but their eyes have all opened, everyone has fled from him totally, even his family members. How does that kind of person speak and expect people to take him seriously? It’s not possible.

"Guru described Primate Ayodele as a fake prophet whose prophecies don't come to pass. Where was he when Primate Ayodele prophesied Super Eagles’ fate in AFCON 2021, military take-over in Burkina Faso, Mali, health condition of Queen Elizabeth, death of Olubadan, Desmond Tutu, postponement of APC convention, crisis between Ukraine and Russia, and several others?

"This Guru who claims he is god said the Super Eagles will lift the AFCON cup. Who now is the fake one? Maybe guru is a god of smelly and red clothes.

"He is just someone filled with so much bad luck; we all know how Sunday Igboho ended after meeting him. Such a sad end.

"The Primate Ayodele he is attacking has done excellently well in his ministry and for Nigerians. Apart from giving prophecies, Primate Ayodele is a very well-known philanthropist.

"He also commissioned a self-sponsored road project worth millions of naira. What has Guru Maharaj done for his church members apart from asking them not to eat good foods?

"Well, I believe Primate Ayodele will not reply to him, they are not in the same league physically, spiritually, economically, and in every aspect of life but there is need for me to caution this fake god of red clothes.

"God is just being merciful, if not, someone like him should have been struck with a stroke or a chronic illness. The day of reckoning is coming and he will definitely be put to shame if he doesn’t repent of his evil ways now."