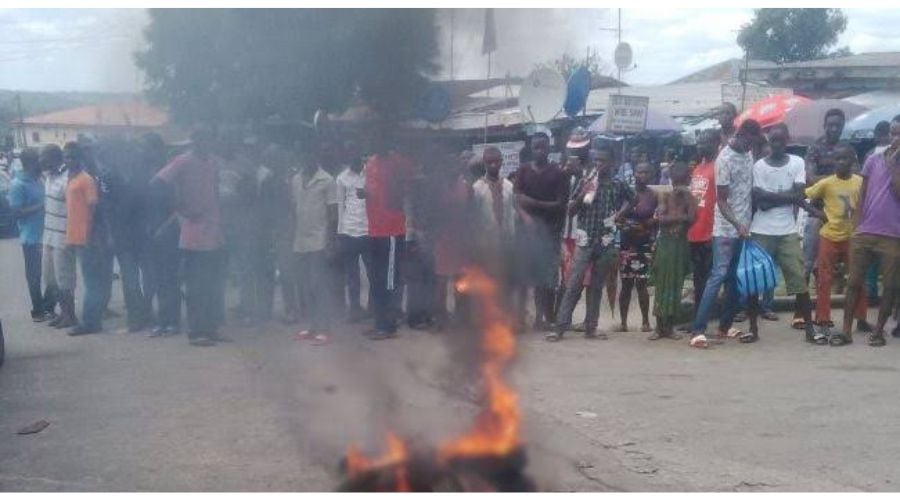 Nemesis has caught up with two suspected motorcycle thieves as they met their end in the early hours of Thursday at Ijokodo – Sango Area of Ibadan.

The suspected thieves met their waterloo after an attempt to carry out another theft operation at the Ologuneru area of Ibadan failed, according to eyewitnesses.

The eyewitnesses stated they were allegedly burnt to death by an angry mob of motorcyclists at WAEC junction, opposite LAPO microfinance bank.

An eyewitness who pleaded anonymity at the scene of the incident maintained that the suspected thieves were three in number, of which the third person who was armed managed to escape.

"The thieves were beaten mercilessly before the Police officers arrived and took them in their car.

"On their way to the station, one of them lost his life and the other was still alive but this made the Police drop both of them in front of LAPO microfinance bank along WAEC junction.

“Before they were dropped, the Okada men who were said to be the ones who caught the thieves and also beat them were following the police vehicle.

"Instantly the police dropped the thieves they went ahead to get petrol and burnt both the dead and the one who was still battling with his life. They burnt them instantly."

Another anonymous source claimed that both men were chased from the Ologuneru area to the spot where they were burnt.

The source also noted that they were three in number and the third person who escaped was the one with the gun.

“It was the Okada men that carried out jungle justice when they caught them. They beat them mercilessly and the police passed the scene without intervening, which prompted the Okada men to quickly burn them.”