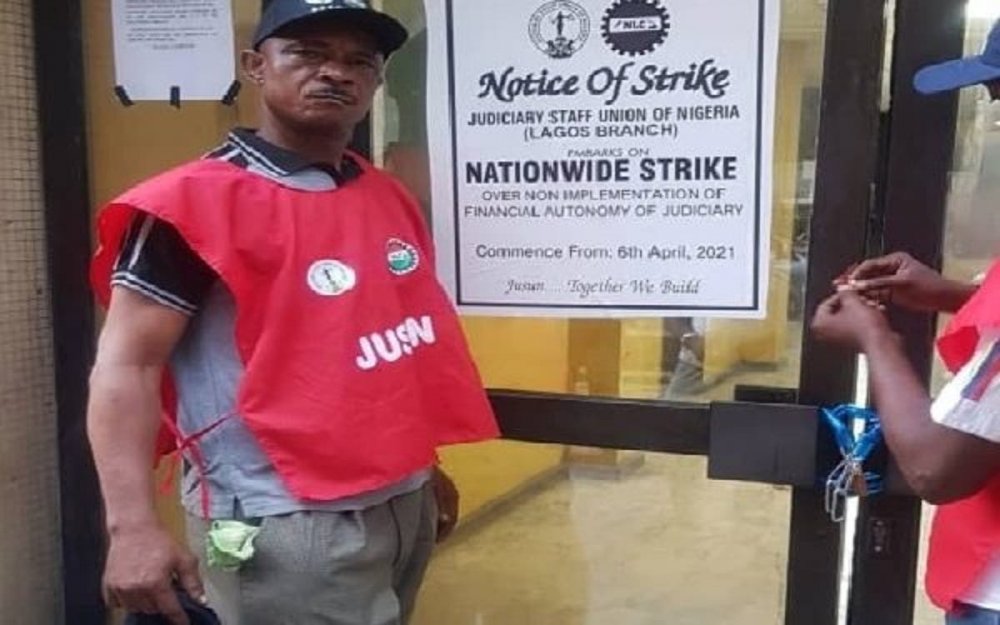 In compliance with the nationwide strike embarked on by judiciary workers under the aegis of Judiciary Staff Union of Nigeria (JUSUN), all High and Magistrates Courts in Lagos were shut on Tuesday.

According to reports, JUSUN declared an indefinite nationwide strike to press home their demand for financial autonomy of the judiciary.

According to a NAN correspondent who monitored developments at the premises of the Federal High Court, Lagos, some lawyers were seen standing around the court’s premises with no ongoing activity, while some members of the union were seen around the court.

Recall that President Muhammadu Buhari had on May 22, 2020, signed into law an Executive Order granting financial autonomy to the legislature and the judiciary across the 36 states of the federation.

Executive Order No.10 of 2020, made it mandatory for all states to include the allocations of both the legislature and the judiciary in the first-line charge of their budgets.

The order also mandates the accountant-general of the federation to deduct from source, the amount due to the state legislatures and judiciaries from the monthly allocation to each state, for states that refuse to grant such autonomy.

JUSUN on April 3, 2021, issued a circular ordering the closure of courts across the country from April 6, 2021, as a measure to ensure implementation of the order.

The union is demanding immediate implementation of financial autonomy for the judiciary, as provided for by the order.

Mr. Kehinde Shobowale, Chairman JUSUN, Lagos chapter, told the press on Tuesday in Lagos that all entrances to court premises in the state would remain closed until the union’s demands were met.

On the implication of the strike on-court activities in the state he said:

“It is just “a simple strike” involving our members, and this means that whoever is a member of JUSUN Lagos Branch will go on strike. That means they will stay at home while only the exco members will be on ground at the high courts. All our gates will be locked.

“I would not know if this will affect the activities of courts or not, but all I know is that the entrances to all courts in Lagos State will be locked. For us in Lagos State, we believe that the Judiciary is still under something I can conveniently refer to as bondage.

“Section 81(3) of the Constitution as amended is so explicit as to what should happen to the finance of the Judiciary; so, why are people not obeying the constitution?

“Order 10 which was signed by the president was to put that section of the constitution in motion, but implementation has not been done, hence, the Judiciary still go “cap in hand” to the executive for funds to run the courts, and that has led the Judiciary being in bondage.

“So, our agitations is that let them obey the constitution, let the Judiciary be free. Let us have our money from the consolidated revenue fund directly to the hands of the Chief Judge, then, we the members of staff can now demand whatever we want from our chief judge.

“If you look at the Constitution very well, we are public officers, not civil servants, so, the constitution takes very good care of us. This time around, it is either they allow us to be autonomous or we remain closed indefinitely,” Shobowale said.