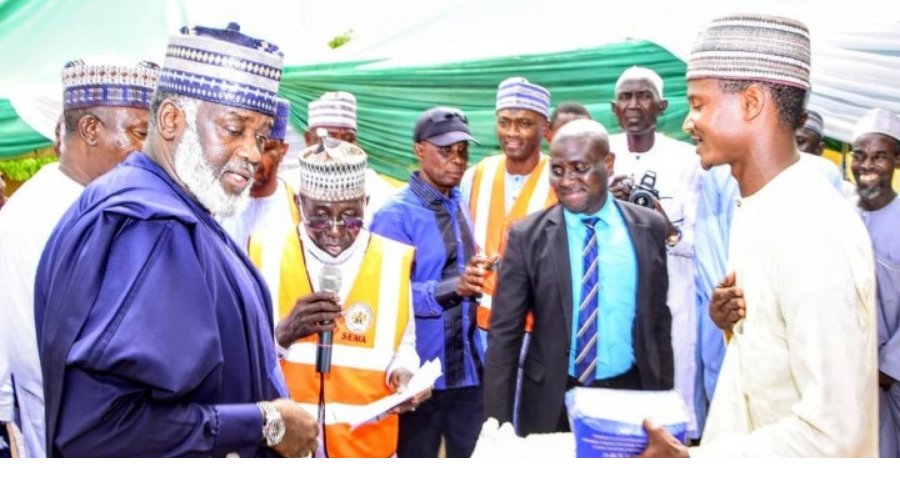 Kano State Governor Dr. Abdullahi Umar Ganduje has appreciated the National Emergency Management Agency (NEMA) for complementing the efforts of his government by donation of relief materials to some victims of disasters in the state.

"The State Government made a special request to the federal government through NEMA for relief materials in order to complement its efforts", he said.

"300 victims will benefit from the gesture, however 100 were selected from the total victims across the affected local governments for flag off therefore the materials we are distributing are for victims of disasters in the category of fire,flooding and farm flood across the 24 local governments areas that were affected in 2021", he added.

Represented by his deputy Dr.Nasiru Yusuf Gawuna on Tuesday, Ganduje made a statement while flagging off the distribution of relief materials to 100 victims of 2021 fireflooding and farm flood disasters held at the premises of the State Emergency Management Agency (SEMA) Office.

A statement issued to newsmen by the Chief Press Secretary to the Deputy Governor, Hassan Musa Fagge, disclosed that he told the victims abiut efforts to to display Government's continued commitment and concern about the plight of its citizens.

He urged the public to listen to advice and warnings issued by relevant authorities on how to avert and curtail disasters and on environmental management.

The Governor also expressed appreciation to the Federal Government for the support given to the State in the area of disaster management.

The Executive Secretary of SEMA l, Saleh Jili explained that the 100 victims will each be given 2 bundles of roof sheet, 2 bags of cement, 1 packet of Zinc nail, 2 bags of rice, 2 bags of beans, 1 bag of maize,  2 tins of tomato, 1 jerry can of vegetable oil and 2 sachets of salt.

Police Confirms Killing Of Assistant Commissioner by Bandits in Katsina

Banditry Forces Katsina To Close Down Over 60 Clinics

Police Confirms Killing Of Assistant Commissioner by Bandits in Katsina

Banditry Forces Katsina To Close Down Over 60 Clinics