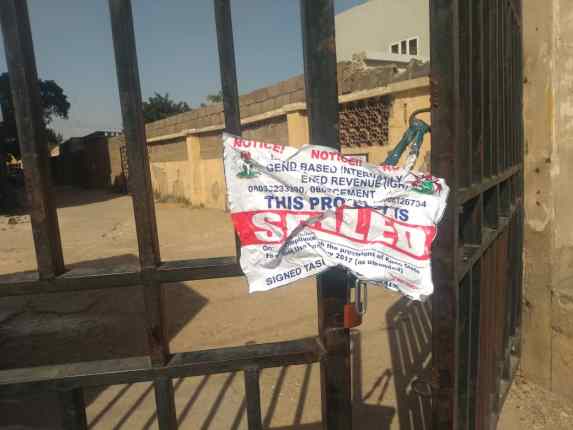 A 6 story building occupying many offices including a Chamber belonging to Nuraini Jimoh SAN, a Lawyer representing a House of Representatives member, Ibrahim Sharada who won a APC Congresses case against the Governor Ganduje in Abuja.

The offices complex was sealed on the grounds that 3 Billion Naira ground tenement rent taxes was allegedly not settled by the offices.

The incident occurred less than 24 hours after a Federal High Court sitting in Abuja ruled in favour of the House of Representatives member, Ibrahim Shaaban Sharada and others in the purported Wards Congresses in Kano.

However, after outcry from the public, the offices were later unsealed on the same orders of the Land Management Bureau, Zainab Buraji.

The officers in a white Hilux with registration number KIRS 62 conveying the leader of the team, Hassan Idiris a Staff of State Revenue office quickly removed the heavy padlock with it’s Revenue sealed that chains the place.

When Journalists enquired from him why did he unsealed the palace, he said, “it is a directives from the Permanent Secretary to open the place”.

The state spokesman of the Police, DSP Abdullahi Haruna Kiyawa was present to investigate possible police involvement in the matter.