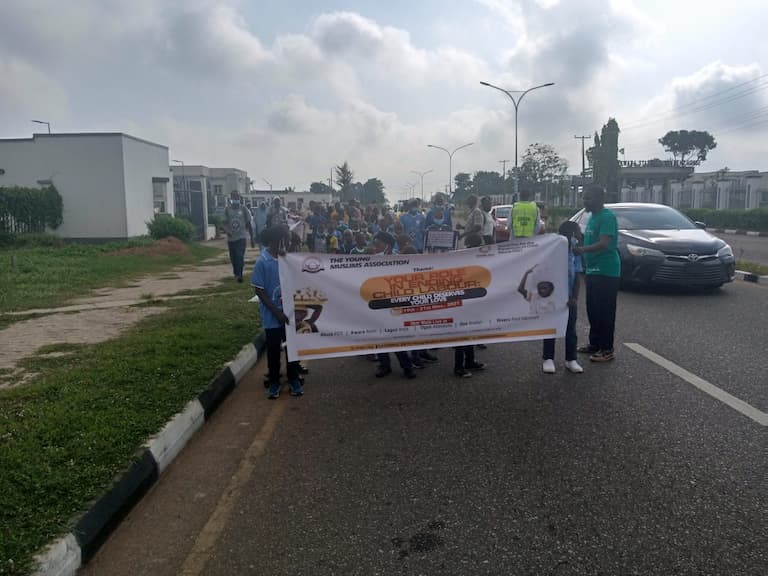 Children in Ilorin, the Kwara State capital, on Sunday, embarked on a walk across major streets in the metropolis in a bid to create awareness on child abuse and trafficking.

The walk, which commenced from the Banquet Hall, opposite the Government House, saw the children from ages 3 to 14 years walk through Gambari Road to Challenge Bus Stop, Ilorin.

It was sponsored by The Young Muslims Association (TYMA) with the theme: “Your Role in ending child labour: Every child deserves your love”, in commemoration of the World Day for the Prevention of Child Abuse in Nigeria.

Some of the placards displayed during the walk by the children, read: “Children require quality time and protection of parents”, “Good childhood memories make children peace-loving and civil adults”, “Abuse changes children’s lives, fight back …by breaking the silence on abuse”, among others.

The Kwara State Coordinator of TYMA, Abdullateef Yusuf, said the event was to mark the World Day for the Prevention of Child Abuse Walk, 2021.

“The global statistics on the issue of child abuse and trafficking has called for the need to create more awareness on the serious menace.

That is why we as an organisation deemed it fit to add our voice to the voices of child abuse.

“Child Abuse is real and it is affecting the children psychologically, their personality and education.

“Everybody must be involved in efforts to eradicate it. We call other organisations and governments to support causes in this regard,” he said.

One of the children, Anas Adekunle, called on parents to beware of actions that might lead their children and wards to child abuse, adding that the menace is real.

Earlier in his address to the children, Governor Abdulrahman Abdulrazaq said he felt honoured to join the children for the awareness campaign.

The governor was represented by his Special Assistant on Religion (Islam), Alhaji Ibrahim Dan Maigoro.

He added the menace explained why many Nigerian states, including Kwara, have domesticated the Child Rights Act to protect the children.

“The period of childhood is meant to cater for and prepare the children for the future.

“It is not a time to impose on them responsibilities or tasks that are either above their age or physical capabilities.

“The Prophet of God, Muhammad (SAW), has been quoted to interpret Q66:6 (Surat At-Tahriim) to have such meanings that include that parents and guardians must protect their children from all forms of harm, including offering them the right guidance.

“One of the best ways to do that is to give children quantitative education that frees them from the poverty of the mind and of means,” he said.