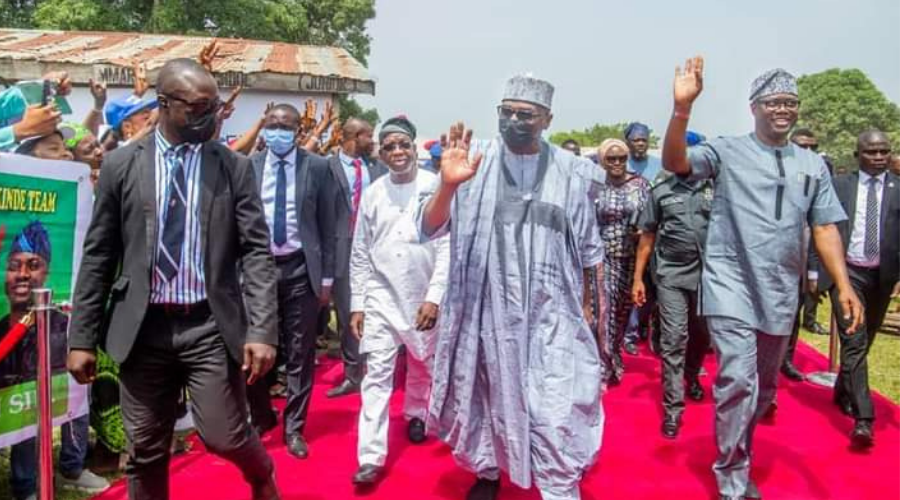 Kwara State Governor AbdulRahman AbdulRazaq on Wednesday joined his Oyo State counterpart Engr. Seyi Makinde to flag off the 76.67 km Ogbomoso-Iseyin road project valued at N43.1billion.This is as he states that the road will boost agribusiness in the area.

AbdulRazaq said the road, is a real 'economic road' that is of immense benefits to the people.

"I congratulate Your Excellency for this important road project which seeks to connect Ogbomoso and Iseyin.

"I feel honoured to have been invited to be part of this history-making project that brings comfort to and reduces travel time for your people who want to travel further south to Abeokuta.

"This is what we call thinking out of the box," he said.

"Similarly, it represents a shortcut for those coming from northern Nigeria, including Kwara, who are travelling to Iseyin or headed to Igboora or Abeokuta.

"In all of these, you are creating huge economic values along this axis.

"You are also saving lives because the ever-busy Oyo Ogbomoso road will be decongested."

AbdulRazaq said the commitment of Oyo State government to road project aligns with his administration's strategic investments to open up the agrarian parts of Kwara for economic growth.

"Currently, we are constructing the first section of the 64m Kishi-Kaiama road, which links part of Kwara to Oyo State.

"To its northwest, we are fixing the 33km Ilesha-Gwanara road. Down south, we are linking the Osi-Obbo road where Ekiti State empties into Kwara, among several other road projects connecting our hinterlands to market," the Governor added.

"It is the right step if we truly desire growth. If a huge percentage of our people are farmers, it is a no-brainer that agribusiness value chains will only thrive when we connect our vast arable lands to the city centre through good roads or rail."

He commended Engr. Seyi for embarking on such a lengthy road project and for naming the facility after the late Governor Christopher Alao Akala, describing Akala as a catalyst for modern transformation of Ogbomoso town who deserved to be so honoured.

"As your neighbours, Kwara will always collaborate with Your Excellency on all fronts to improve the lots of our peoples.

"I urge that our bipartisan efforts to jointly secure our border towns and make them safe for socioeconomic development should continue," he added.

Governor Makinde, for his part, said the logic behind constructing the road is to ease inter-city and inter-state movements, which he noted will promote trade and boost agricultural value chain.

He commended AbdulRazaq for attending the event, regardless of their party differences.

"Many people may not know that Oyo State shares a boundary with Kwara at Ogbomoso. So, this road is of vital economic importance to both states.

"When it comes to the facilitation of trade between the two states and the movement of  agricultural produce, our farmers and other investors will be able to go from Iseyin all the way to Kwara through this road," the Governor said.

"Also, the road will facilitate easy commute between Ladoke Akintola University of Technology campuses in Ogbomoso and Iseyin.

"So, for those that are asking for the logic behind this road, it is that we are facilitating both inter-city and inter-state movements."