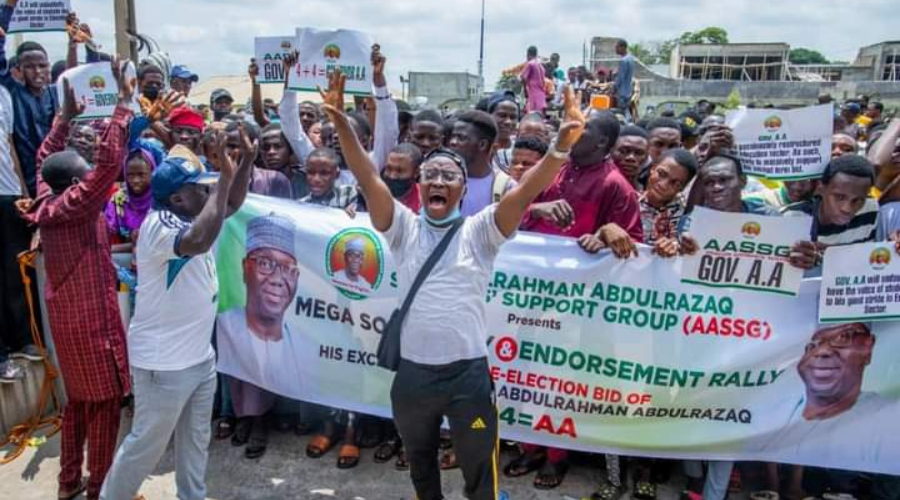 Hundreds of students besieged the streets of Ilorin on Sunday in appreciation of Governor AbdulRahman AbdulRazaq's education sector reforms and investments which according to them offer the Kwara child a good opportunity to excel.

The students said the Governor's efforts in the education sector, reviving the Colleges of Education, payment of counterpart funds, infrastructural renewals, and recruitment of competent teachers have earned him their support.

The rally was held under the aegis of the AbdulRahman AbdulRazaq Students' Support Group (AASSG) led by Comrade Salami Wasiu Onidugbe.

Onidugbe said the achievements of the administration over the last three years have been unique and commendable.

"We are here today to show the Governor that we are ready to support his re-election bid come 2023 general elections.

"Governor AbdulRahman AbdulRazaq deserves to be re-elected because he has positively transformed many sectors, especially the education sector," Onidugbe said.

"One good turn deserves another. We organised this rally to tell the entire Kwarans that Governor AbdulRazaq has performed well, hence he deserves a fresh mandate."

Onidugbe said the group would also organise a voters' education programme to encourage the youth to participate actively in the electoral exercise.

The Governor, for his part, described the solidarity rally as a morale booster for the government to do more in the delivery of dividends of democracy.

The administration's interventions in infrastructural development, especially in education, healthcare, water, road and other social amenities, form part of his campaign promise in 2019, AbdulRazaq said.

"What you have done today encourages us to do more for students and youth. We will continue to invest in critical infrastructure that will guarantee good welfare of the entire citizens," he added.

AbdulRazaq enjoined the students to ensure that they get their PVCs to exercise their franchise at the polls, urging them to take their studies seriously.

"I encourage you to take your studies very seriously because that is what brightens your chances in life.

"I also advise you to get your PVC now so that you will have the power to vote for the right candidates at the 2023 polls," he said.

The Governor received the students in their hundreds at the Government House Ilorin alongside a few government officials, including the Secretary to the State Government Prof. Mamman Saba Jibril; Commissioner for Communications Olabode Towoju; and the State APC Youth Leader Lawal Sulaimon Duduyemi.