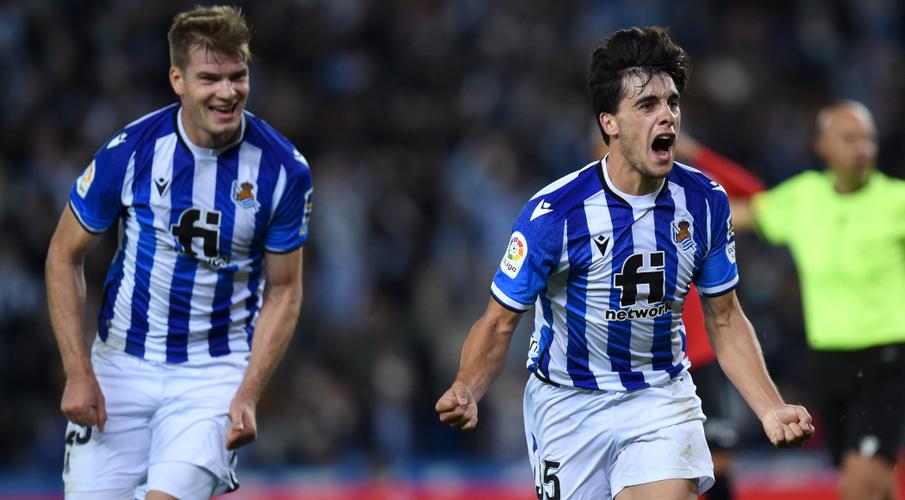 Real Sociedad moved ahead of Real Madrid to the top of La Liga on Saturday after scoring a dramatic last-minute winner to beat Real Mallorca, despite playing half the game with 10 men.

Julen Lobete fired inside the near post in the 90th minute to snatch a 1-0 victory and spark pandemonium at the Reale Arena, where the fans and players celebrated like they had won a trophy.

"I was crying with joy," said Lobete, who had covered his face with his hands after scoring. "I can't describe it."

In jubilant scenes after the final whistle, the players paraded the 2020 Copa del Rey trophy - won earlier this year in the postponed final against Basque rivals Athletic Club - in front of their own fans for the first time.

"These players don't lack ambition or belief but when the fans are like that in Reale Arena, it's easier," said coach Imanol Aguacil.

"We were able to celebrate with them, show them the cup and live that moment with them. We know the love they have for the players and from the players for the fans."

And while Real Madrid face Barcelona in the first Clasico of the season next Sunday, Real Sociedad's game away at reigning champions Atletico Madrid now has more riding on it at the top of the table.

"It's a great start but that's all it is," said Aguacil. "We have to continue in this way."

With Real Madrid and Atletico both sitting out the weekend's matches due to the extended South American international break, Real Sociedad knew they could take first place by avoiding defeat against promoted Mallorca.

But winning became a harder task when Aihen Munoz was given a second yellow card at the end of the first half, a wild hack on Mallorca's Rodrigo Battaglia leaving his team to play the whole second period with a man less.

Yet La Real never crumbled and instead grabbed a sensational winner in injury time.

Lobete, who had come on as a substitute, collected Martin Zubimendi's through ball on the edge of the area and just as he looked to have lost his balance, he shifted the ball right and unleashed.

Mallorca goalkeeper Manolo Reina got a hand to the shot but failed to prevent the ball from squirming inside the near post.

Real Sociedad's players rushed to the corner, piling onto each other in celebration.