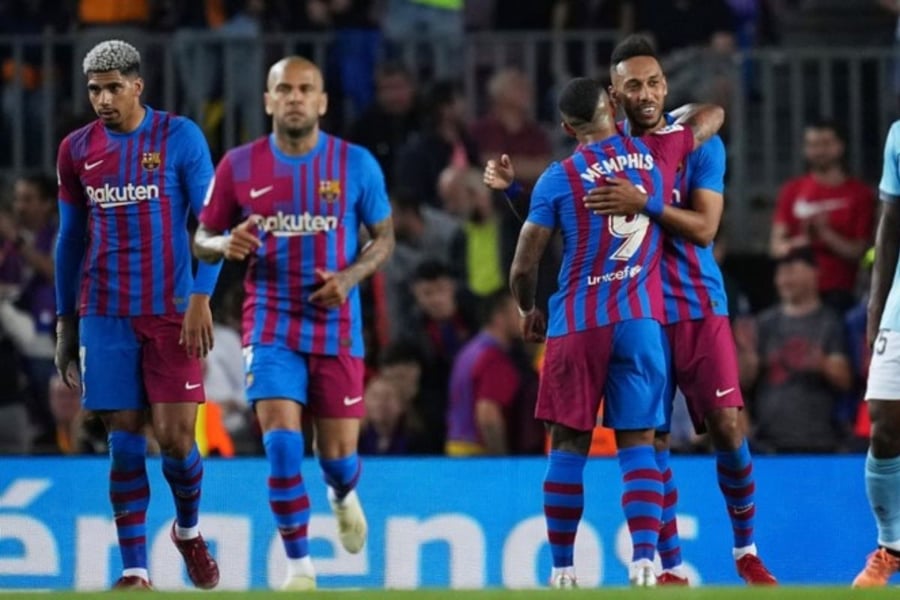 Gabonese forward Pierre-Emerick Aubameyang scored a brace for Barcelona to tighten their grip on second place in La Liga on Tuesday with a 3-1 win at home to Celta Vigo.

A brace at Camp Nou on Tuesday means Aubameyang has now scored 10 goals since joining Barcelona in January. Memphis Depay also showed his quality in front of goal scoring the opener.

Ousmane Dembele also kept current form with two assists on the night aside from his pacey runs which kept Celta's defence up all night.

But Barca’s victory was overshadowed by a serious head injury to defender Ronald Araujo, who had to be taken away in an ambulance in the 64th minute of the match.

Araujo was lifted into the ambulance on a stretcher, wearing a neck brace. Barcelona confirmed the 23-year-old “suffered a concussion and has been taken to the hospital to undergo further testing”.

Araujo’s injury came after he and Gavi banged heads challenging for the same ball. Araujo ran for a few seconds before dropping to the floor as a concerned Iago Aspas and Eric Garcia called urgently for the medics.

The Uruguayan was put into the recovery position and after a few minutes, he was lifted into an ambulance that had driven onto the pitch. Barcelona fans chanted his name as Araujo was taken away.

Aubameyang’s double on either side of half-time came after Memphis Depay had opened the scoring at Camp Nou. Celta pulled one back through Aspas but any hopes of a comeback were dashed when Jeison Murillo was sent off just before the hour.

Barca move seven points ahead of Sevilla and eight in front of Atletico Madrid, with Sevilla and Atletico playing each other at the Wanda Metropolitano on Sunday. Real Madrid, who have already been crowned champions, sit nine points clear of Xavi Hernandez’s side at the top of the table, with a game in hand.

Securing qualification for next season’s Champions League last weekend means Xavi’s primary objective has already been achieved but the club’s dire financial situation means the team can still not afford to let up.

Every place towards the top of La Liga is worth around seven million euros while qualifying for the four-team Spanish Super Cup by finishing in the top two is worth another eight million euros to the Catalans.

Real Betis had earlier kept their top-four hopes alive by easing to a 3-0 win away at Valencia. Willian Jose, Sergio Canales and Borja Iglesias all scored goals in the second half.

Betis closed the gap to Atletico Madrid in fourth to three points, with Atletico playing a game in hand away at Elche on Wednesday.