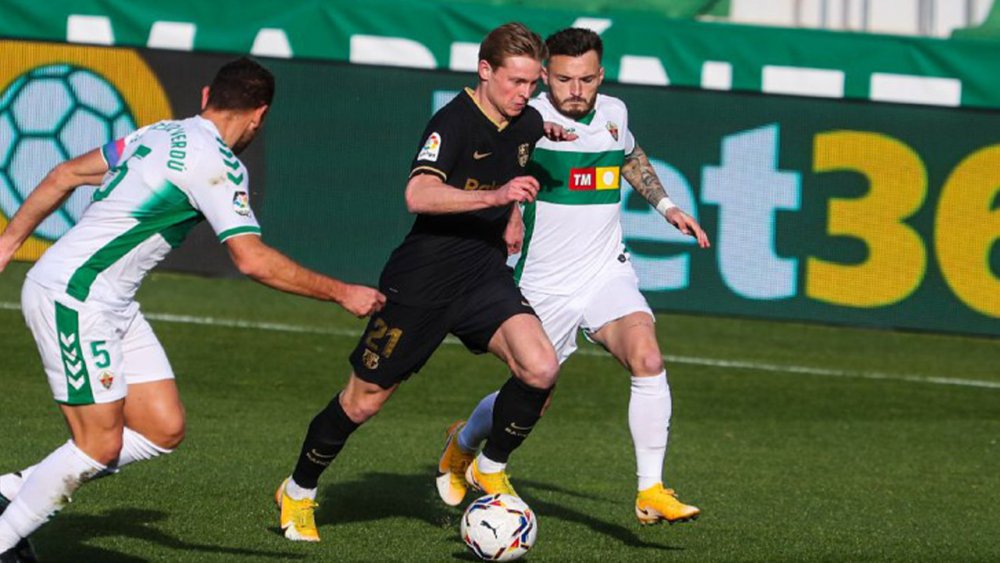 Barcelona without Lionel Messi thresh struggling Elche 2-0 in LaLiga on Sunday thanks to goals late in each half from midfielders Frenkie de Jong and Riqui Puig.

Barca went ahead in the 39th minute with what looked to be an own goal from Elche's Diego Gonzalez but Dutchman De Jong, who had delivered the cross which caused Gonzalez to divert the ball towards goal, sprinted to get the final touch just before it crossed the line.

Elche winger Emiliano Rigoni missed a great chance to level for the home side in the second half after a glaring error from Barca defender Oscar Mingueza but was denied by a heroic save from Barca keeper Marc-Andre ter Stegen.

The Catalans struggled to find a second to ease their nerves until substitute Puig headed in a cross from De Jong in the 89th minute to score his first LaLiga goal and clinch a fourth consecutive win for Barca.

De Jong, in his best form since joining the club two years ago from Ajax Amsterdam, thrust past two defenders to race towards the byline but still managed to keep his composure and deliver a perfect cross for the diminutive Puig to head home.

Ronald Koeman's side are third in the table on 37 points, seven behind leaders Atletico Madrid who have two games in hand. Elche remains 19th on 17 points, two from the safety zone.

"We have been playing a bit better since the year began, we've won all our games which shows we have improved," said De Jong, who has scored three times and provided two assists in his last six matches in all competitions.

"We had to press them hard because they wanted to play the ball out from the back and if you don't press properly as a team it can get difficult. This was not an easy game but we worked hard and are very happy to have won it.

"Scoring goals and providing assists doesn't mean you are playing better necessarily but I'm very happy to have done so."