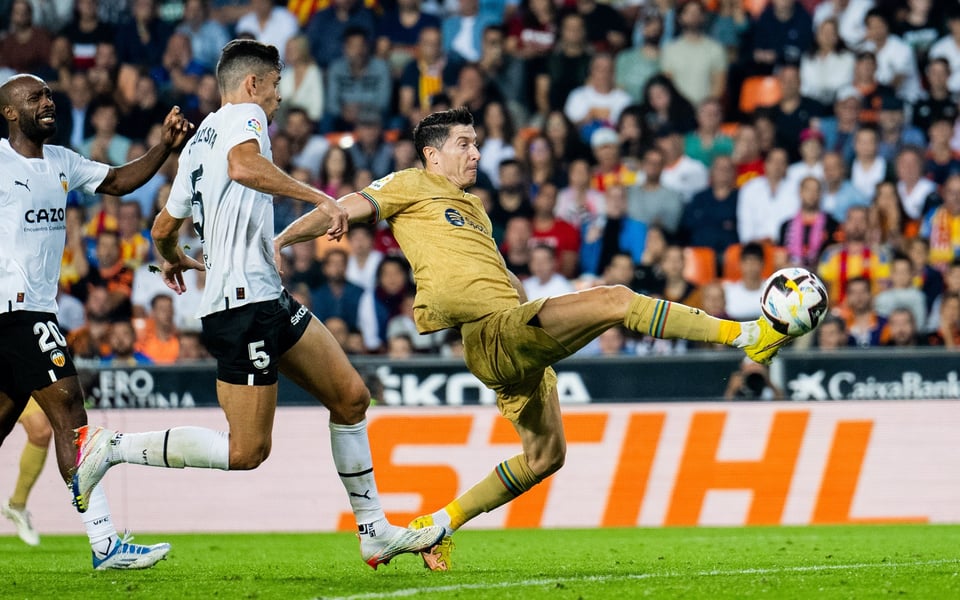 Robert Lewandowski stretched to convert a 93rd-minute winner for Barcelona to snatch a late 1-0 victory at Valencia on Saturday in LaLiga, a comfort after Champions League elimination in midweek.

The Polish forward managed to divert Raphinha's cross home at the death to pull Barcelona level on 31 points with Real Madrid at the top of the table, before the champions host Girona on Sunday.

It was a hard-fought win – the Catalans lost centre-backs Jules Kounde and Eric Garcia to injury, and they will be worried for their national teams, France and Spain respectively, ahead of the Qatar World Cup which starts in under three weeks.

Valencia saw Uruguayan Edinson Cavani go off injured with an ankle problem too, with the game billed as a shoot-out between him and fellow veteran marksman Lewandowski, who came out on top with his late goal.

Gennaro Gattuso said he and Barcelona counterpart Xavi Hernandez played almost different sports in their playing days, but their teams were evenly matched at a feisty Mestalla.

The visitors had the upper hand from the start, although Valencia's tricky forward line caused them concern at the back, with Samuel Lino and Justin Kluivert particularly hard to handle.

Ansu Fati should have opened the scoring when set up by a perfectly timed Pedri pass, but onrushing Valencia goalkeeper Giorgi Mamardashvili saved the forward's attempted dink with his face.

Frenkie de Jong hammered an effort wide from distance, while Fati, on a rare start, could not direct a header from Ousmane Dembele's cross low enough to cause problems.

Valencia thought they had broken the deadlock early in the second half when Lino slid home but Marcos Andre hand-handled a cross into his path and the goal was disallowed.