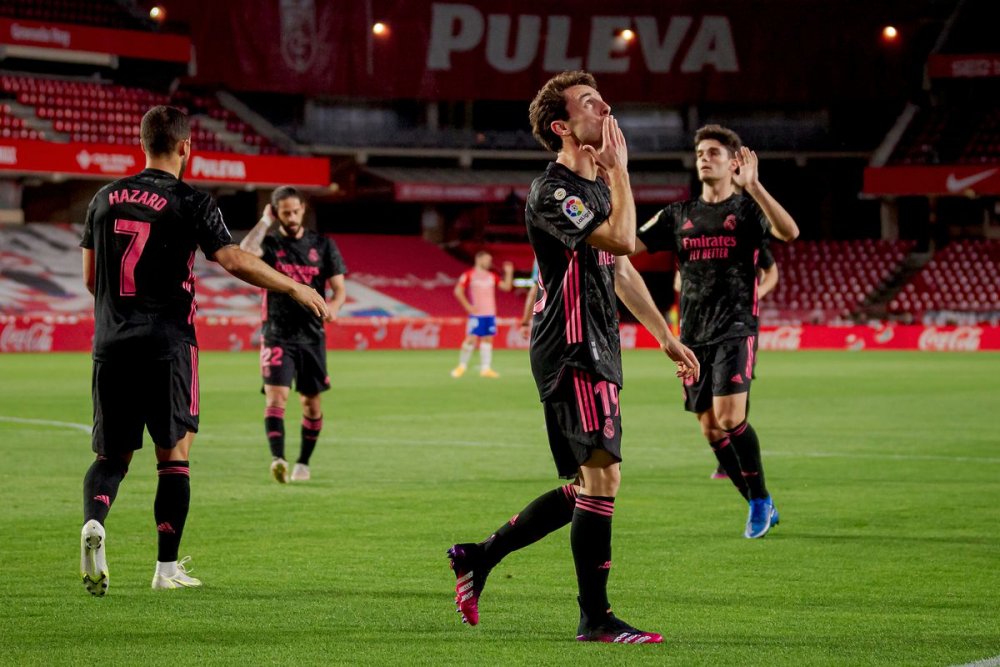 Real Madrid kept the pressure on Atletico Madrid by thrashing Granada 4-1 on Thursday to reduce the gap to two points at the top of LaLiga, with two games left to play.

A draw or defeat for Real Madrid would have given Atletico the chance to win the title on Sunday by beating Osasuna but goals from Luka Modric, Rodrygo, Alvaro Odriozola, and Karim Benzema secured a comfortable victory at Los Carmenes.

Atletico could still be crowned champions this weekend if they overcome Osasuna and Real Madrid fail to win away at Athletic Bilbao but the Spanish title race has been full of surprises and still, nothing is guaranteed.

"We're still in it," said Real coach Zinedine Zidane. "There are two games left, we have to deliver and today we delivered."

"We can only keep putting pressure on Atletico and hope they don't win both of their games," added goalkeeper Thibaut Courtois. "We are close, there is no margin for error."

Third-placed Barcelona are still in the running, even if Tuesday's 3-3 draw away at Levante leaves them needing an incredible swing of results if they are to overturn a four-point deficit in two games.

The theme of Real Madrid's challenge in recent weeks has been survival, their squad stretched to its limits by injuries and absentees but a particularly youthful team produced a vibrant display to see off a Granada side that earlier this month beat Barca at Camp Nou.

Zinedine Zidane started three 20-year-olds and a 19-year-old in what was arguably, given the stakes, the club's most important league game of the season, and his youngsters delivered.

Zidane has been as loyal as ever to his aging core this season but necessity has forced him to turn to look elsewhere and it remains to be seen whether he shows more trust in the likes of Miguel and Marvin in the future.

"They did well from the start," said Zidane. "They want to play, they want to show their quality and that's what they've done."

The veterans delivered again too, the 35-year-old Modric adding a goal to another instrumental performance, in what was his 55th appearance of the season.

Benzema scored his 29th goal of the campaign and 22nd in LaLiga, which leaves him two short of his record.

Madrid were excellent in the first half and took the lead in the 17th minute when Miguel cut in the from left and scooped a superb pass into the path of Modric, who held off Domingos Duarte and fired in at the near post.

Rodrygo added a second just before halftime, profiting after Marvin had freed him with a sliding challenge near the halfway line. Rodrygo advanced into the penalty area and drove into the far corner.

Madrid's dominance faded after the break and Granada briefly threatened a comeback, a long ball forward not dealt with by Eder Militao, giving Luis Suarez the chance to shoot and Jorge Molina to tap in the rebound.

But the tension was never really allowed to build because four minutes later, Madrid made it three.

Eden Hazard, off the bench, couldn't control Modric's pass but recovered with an impressive pull-back for the arriving Odriozola to finish.

Thirty seconds after Granada kicked off, they conceded a fourth, their goalkeeper Rui Silva making a mess of Casemiro's launched pass forward, with the ball spilling out to Benzema, who had an open net.