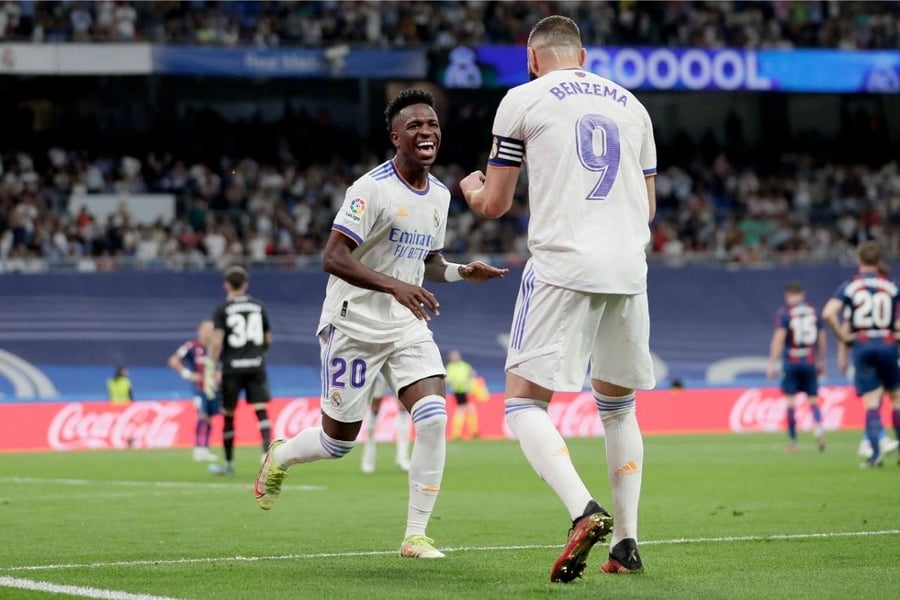 Vinicius Junior scored a hat-trick for Real Madrid in a 6-0 riot against Levante to condemn the Valencia club to relegation in preparation for the UEFA Champions League final against Liverpool.

Benzema's goal saw him draw level with Real Madrid great Raul as the Spanish giants' second-highest goalscorer by netting his 323rd goal for the club.

Vinicius opened his account just before the interval before adding two more in the second half to condemn Levante to the drop as they suffered their 19th defeat of the season.

"It's nice to score my first hat-trick as this amazing season comes to its end," Vinicius told Movistar Plus.

"We have enjoyed a lot playing at Santiago Bernabeu this season and our focus now is to prepare for the Champions League final.

"The connection that I have with Karim has been very good all season. I hope to continue like this until Karim retires. I hope he finally wins the Ballon d'Or this year."

Mendy opened the scoring in the 13th minute with a fast counter-attack started by Luka Modric before Benzema extended their lead six minutes later after heading in a Vinicius cross.

Rodrygo scored the third with a close-range strike after being provided with a fine assist from Modric, who also turned provider for Vinicius's first goal.

Vinicius latched onto a Benzema cross in the 68th minute before the Brazilian sealed Real's win with a close-range strike seven minutes from time.

At the bottom of the table, Mallorca and Alaves are also in the relegation zone and both have two games left to try and salvage their LaLiga status.