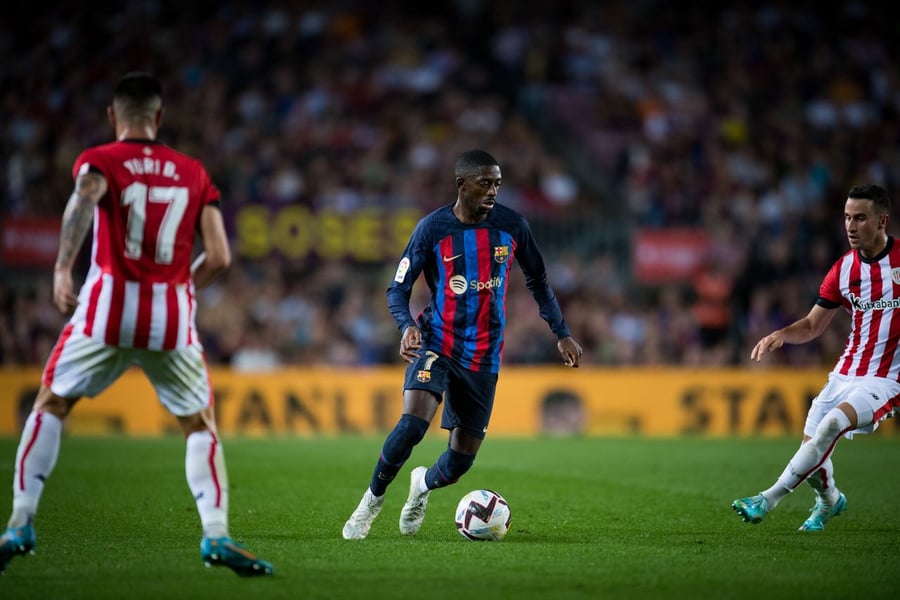 French winger Ousmane Dembele starred for Barcelona as they ripped apart Athletic Bilbao in a 4-0 win in LaLiga on Sunday on Ernesto Valverde's return to the Spotify Camp Nou.

Dembele who was dropped against a similar cruising win against Villarreal, was at his thrilling best after being brought back into the side and challenged to make the difference for coach Xavi Hernandez.

Dembele netted the opener and then created goals for Sergi Roberto and Robert Lewandowski in the first half as Barcelona danced around Athletic.

Ferran Torres fired home in the second half after Dembele found him in the area to complete the drubbing.

"It's the life wingers have, ups and downs, they have to go for it, it's what I always say," said Xavi.

"Some days it works, others not, but they have to go for it. Ousmane made the difference."

It was Valverde's first game facing Barcelona since being sacked in January 2020 after winning two league titles, but it did not go to plan for him.

It showed a glimpse of what Xavi's side is capable of facing the third highest scoring team in the league -- Bilbao, who have scored 19 goals.

"It's been a horrible day because we lost 4-0," said the coach. "They punished us today."

Just as three goals in an eight-minute spell helped Barcelona vanquished Villarreal on Thursday, another quick-fire treble killed off Athletic.

"We came out very strongly, we knew that they are intense and we had to match them," captain Sergio Busquets told Movistar. "We overpowered them in the middle and we were accurate.

"I am sure Xavi is happy. The objective is to win and to do it in a complete way, playing well. This elevates the level of the team."

Xavi selected Pedri to operate on the left of the attack in his 4-3-3 formation, as Barcelona legend Andres Iniesta did on occasion –- giving further credence to the already frequent comparisons between the two.

It increased the team's fluidity, as did a double pivot of Busquets and Frenkie de Jong, although the star dust was added by Dembele.