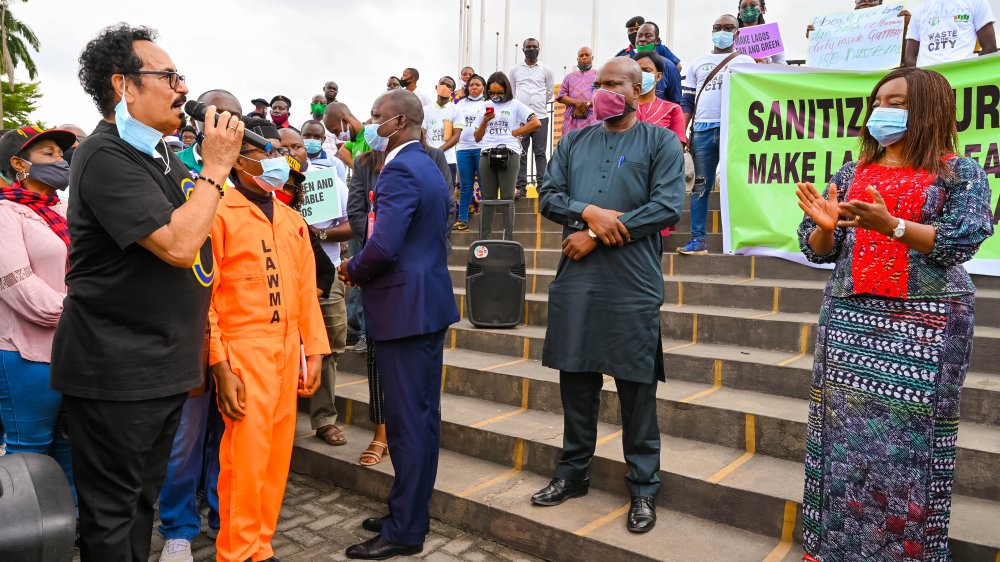 Lagos State First Lady, Dr. Ibijoke Sanwo-Olu on Tuesday emphasized the need for the advocacy against indiscriminate waste disposal to be disseminated in indigenous languages to drive home the message of proper waste management in line with international best practices.

The First Lady, who commended the organizers of the advocacy walk for believing in the vision of Mr. Governor, Babajide Olusola Sanwo-Olu to ensure proper waste management in line with Sustainable Development Goals, said it was important for the message to be broken down into different languages for people to imbibe the essence of a clean environment.

She said the task to ensure a clean environment requires a collective effort, just as she tasked members of the entertainment industry to come up with various songs to further create awareness on the need to ensure sustainable waste management.

“Cleanliness is next to Godliness. It’s something we can do. Considering that the war against waste will be launched in the three senatorial districts, I am so happy that we have a baseline that we are looking at and we also have scorecards. The issue of cleanliness requires a collective effort. Mr. Governor cannot do it alone; the cabinet cannot do it alone and so it is a joint effort by all of us.

“I like the fact that we are going the route of campaigning, creating awareness and advocacy. We need to continuously repeat this. it is a very important task because no matter how much money we spend getting the trucks and getting the dustbins if we don’t continuously create this awareness among our people in the different languages, the result will be the same.

“In Lagos alone, we have Egun, Ilaje, Awori, the Yorubas, the Ibos, the Hausas, the Ijebus, the Ghanaians, the Togolese, among others. So, Lagos alone has so many languages and when we want to interpret, we have to interpret in all those languages. The entertainment industry too, I am happy we have PMAN here, the songs will go a long way in communicating to the people the need to keep the state clean,” she said.

She said aside the nexus between waste management and health, the issue of a clean environment was equally important in creating investment opportunities in the State and country.

“When we go abroad, when we go to neighboring countries, we see what it is and we like it and everybody wants to run away from Nigeria to go and spend some time on holidays abroad.

Also speaking, Permanent Secretary, Lagos State Office of Environmental Services, Mrs. Belinda Odeneye urged residents to key into the waste to wealth initiative of the State Government, saying people must understand that waste should not and must not be wasted.

Earlier, the Convener of the walk and President of SWEEP Foundation, Obuesi Philips said the walk was aimed at driving community awareness and involvement in sustainable waste prevention.

The walk started at Awolowo House, Ikeja, proceeded through Allen Avenue and terminated in front of the Lagos State House of Assembly complex, Alausa, Ikeja.

Lagos Govt To Use Technology To Tackle Traffic