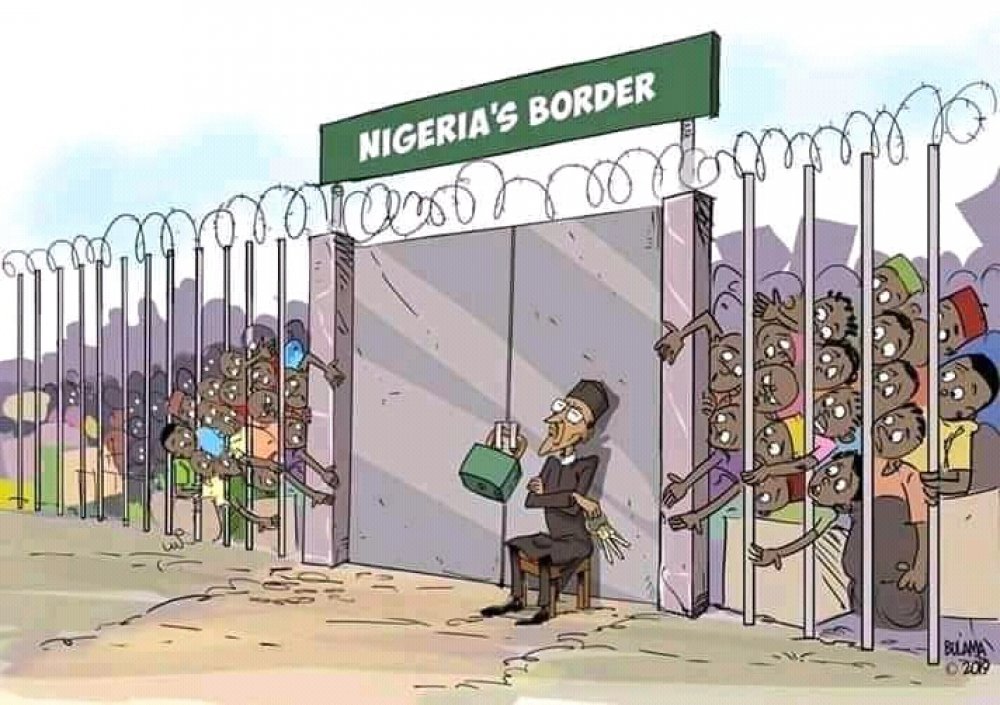 President Muhammadu Buhari-led administration claimed the land border closure was a necessary decision to protect local producers and farmers against smuggled goods and foreign products saturating Nigeria's market, however, AllNews findings have shown that Buhari's border policy have hurt Nigerians and its economy more than it does to Nigeria's neighbouring countries, which Buhari said he was targeting.

President Buhari said one of the reasons Nigeria's land border was closed is to send a message to its neighbouring countries due to their handling of the border security. Nigeria's land border is porous and has been an advantage to smugglers, aiding illegal trade of goods within the country.

Nigeria shares border with Niger, Chad, Cameroon and Benin. These countries are trade partners with Nigeria and serve as routes for other African, western and Asian countries looking to trade with Nigeria - either export or import trade.

Goods from various countries find their way into Nigeria without passing through the proper channels, costing Nigeria sizable amount of levy income; this has been a tradition for years. In a shocking move, President Buhari closed the land border in October 2019, in order to forestall the illegal trading.

It's been more than a year since the land border closure, and the Federal Government has been mulling over reopening the border which has financially cost businesses in Nigeria and other countries. In his first direct comment on the border closure - after a long period - Buhari said the closure has achieved one of its purpose.

According to Buhari, the closure of land border was also meant to curb smuggling in of weapons and drugs - he said the message has sunk into Niger, Chad, Cameroon and Benin government, hence, the border will be opened as soon as possible.

"In my meeting with State Governors today I explained that the closure of Nigeria’s land borders was partly an attempt to control the smuggling in of weapons & drugs. Now that the message has sunk in with our neighbours,we’re looking into reopening the borders as soon as possible." Buhari said in a statement seen by AllNews.

Nigerians At Receiving End Of Arrow Meant For Neighbouring Countries

While Buhari believes the neighbouring countries have received his government's warning clearly, Nigerians have been hurt more. The closure of the land border increased cost of living within a country where unemployment and underemployed is high.

Buhari's sudden closure of the land border in October last year sent many businesses into panic mood and caused prices to skyrocket as businesses moved to recover their revenue loss on shipment stuck at the land border.

One of such business is So Fresh, which sourced some of its raw materials at neighbouring countries, another is X-Pression, a hair making company in Nigeria, which couldn't supply its business partners with products, causing a loss of revenue.

Businesses and individuals couldn't export or import their goods through the land border, with alternatives being the costly seaport and airport - this further drove the cost of products and service through the roof, leaving end-users at the mercy of inflation.

This shows the negative impact of the land border closure on Nigeria's cost of living within the period the border has been closed. While the land border is one of many factors; poor electricity supply, COVID-19, transportation, insecurity - that influenced inflation rate between October 2019 to October 2020, it is a vital element that drove inflation rate.

For Benin, which shares the Western border with Nigeria, its inflation rate stood at -0.4% in October 2019, but rose to 1.5% the next month, before dropping again to 0.3% in December last year. The inflation rate continued to rise and fall, but stood at 4.8% in September 2020, according to last data about the country's inflation rate by Trading Economics.

Chad, which sit at Nigeria's eastern border, had -3.3% inflation rate in October 2019, and remained negative for two consecutive months of November and December; -2.8% and -1.7%. AllNews gathered that the inflation rate rose in January 2020, rising to 1%.

Niger, which shares the north border with Nigeria, had an inflation rate of -1.9% in October last year, and fell further to -1.8% and -2.3% in November and December respectively. In 2020, inflation was zero in January before rising to 0.3%, and further rise to 1.2% in February.

The inflation continued to rise and fall before a significant jump from 2.6% in June to 5.1% in July. Thee inflation continued its upward movement hitting 5.7% in August this year. Findings showed that Niger is projected to end 2020 with 4.4%, but expected to decline to 1.7% in 2021, according to Statista.

What This Means For Nigeria

Thereby, increasing the amount each sector the companies are operating in contribute to the gross domestic product (gdp; economy). In the same vein, increased demands will cause production to rise and force companies to expand or increase workforce - this means an increase in employment opportunities.

But with Nigeria experiencing increase in inflation rate monthly, the country is not benefiting from the advantages of high purchasing power. Due to the increasing inflation rate, the disposable income (available more to spend or invest) is low and won't encourage Nigerians to raise their demands for products or goods.

That's one of the reasons Nigeria is having revenue problem, as jobs are not being created, thereby reducing tax revenue, expansion rate of companies is slow, disposable income of Nigerians is low, so returns to the economy is not enough for the government to run the country - this will further push Nigeria into more debt.