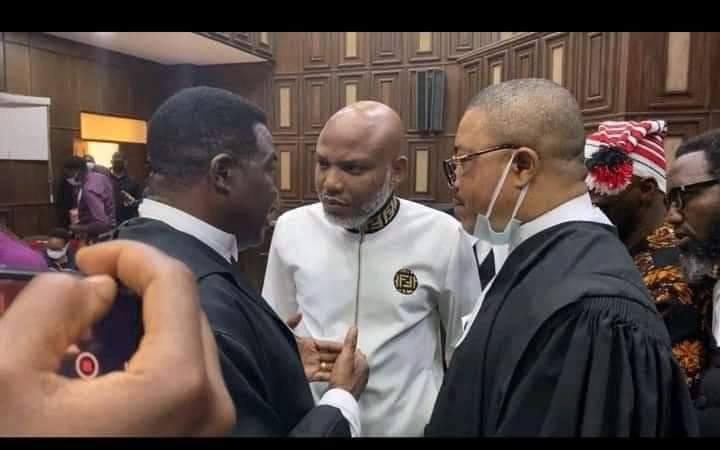 Recall Nnamdi Kanu was today arraigned at the federal high court with fresh charges levelled against him.

Below Are The Latest Biafra News & Nnamdi Kanu Trial For Today;

Ejiofor confirmed that changes have been effected in the defense in view of the new charges from the Federal Government...READ MORE

The United States and the British Government have denied the request to observe Nnamdi Kanu's trial.

Nnamdi Kanu’s lawyer, Ifeanyi Ejiofor on Wednesday, January 12, 2022, wrote to the United States and the British Government in Nigeria requesting their presence to ensure a fair hearing for his client.

The legal team of Nnamdi Kanu has objected to fresh charges filed against the IPOB leader.

Recall that the President Buhari-led government had amended the charges which was initially a seven-count treasonable felony charge to a 15-count amended charge marked FHC/ABJ/CR/383/2015.

Addressing journalists after the proceedings Ozekhome said: “I have consulted with my client with regards to the 15-count charge. Some of the statements made by him that were not clear, which I pointed out to the court, the prosecution has been able to give me a copy that is more legible....READ MORE

Kanu, through his team of lawyers led by a Senior Advocate of Nigeria, Chief Mike Ozekhome, further accused the government of denying him the necessary facility to defend the charge against him...READ MORE