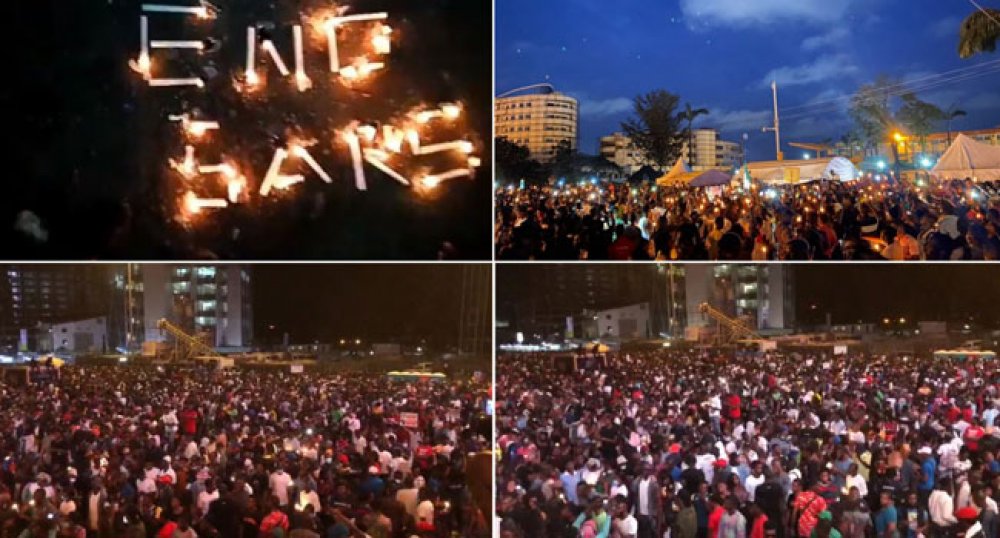 File Image of the EndSARS Protest

The Lagos State Head of Service, Hakeem Muri-Okunola on Tuesday told the Judicial Panel of Inquiry on Police Brutality other related abuses that injuries recorded in the aftermath of the Lekki shooting were predominantly fractures, machete wounds, and minor cuts.

He said the #EndSARS protest was hijacked by hoodlums who disguised themselves as part of the protesters to carry out violence.

As evidence of his testimony, Muri-Okunola showed the panel visuals and slides from the Lekki toll gate protests

He also testified that in the wake of the shooting, the governors and his team visited the hospitals on the night of October 20, 2020, and saw that most of those who presented for treatment had fractures, machete cuts, and minor wounds.

“There were about 13 persons injured at Reddington Hospital, and 12 injured at the General Hospital, Marina. The doctors in charge said one of the patients that were being moved to LASUTH, had more severe injuries from machetes’ wounds.

“At the time we were there, most of the injuries were all in the nature of cuts, bruises from machetes’ wounds, and stampede. Nobody at the hospitals said they were shot at.

“The next day, the governor appealed to residents in a broadcast to stay calm. He appealed to the youth to stay at home. He also informed Lagosians that they were no casualties that had been recorded in the hospitals in the vicinity of the Lekki based on information from monitoring the incident.

“Shortly after this, we got reports that one of the patients in Reddington hospital had passed on and died from blunt force trauma and another report came of another death from Yaba.”

On the actual number of alleged deaths at the Lekki Toll incident, since the 20th October 2020, the witness noted that many of the people reported to have been killed refuted their rumored deaths.

He listed Nollywood actress, Eniola Badmus, Stephen Becky, Iraby of Oto-Auch, Joshua Ogbodo as some person who was said to have been killed during the Lekki shooting but who have since come out to deny the same.

Under cross-examination, by Adesina Ogunlana, counsel to some of the #EndSARS protesters, Muri-Okunola reaffirmed that he heard that military men from Bonny camp were at the Lekki toll gate, and based on video evidence they were armed, and “shots were fired.”

“At about 6.45pm, on Oct 20, we received feedback via a phone call from a resident in Ikoyi of gunshots in the area, we thought it was a robbery until there were subsequent calls reporting same from the other side of the River, the Ozumba Mbadiwe side and that person confirmed it was from the toll gate plaza,” Muri-Okunola said.

He added that based on this and subsequent information, the Governor called the MD of the Lekki Concession Company (LLC) to ask if there were gunshots at the toll plaza.

“On social media, based on supposed live broadcasts and comments, they said it was armed soldiers so this led the Governor to call General Ndagi who was the representative of the Army on the Security Council meeting. He informed the governor that it was not his men at the toll gate as they also had been instructed to stand down. At that particular point in time, our concerns were that if the shooting was going on, we needed to deploy emergency services and that was our focus.

“We also directed the Commissioner of Health to start speaking to hospitals if there were casualties in the neighborhood of the Lekki toll gate.

“We were informed that there were casualties at some of our hospitals in Lagos. There were more in the Reddington Lekki and the General Hospital, Marina. We got information from other parts of Lagos where there was also violence,” the HoS explained.

Earlier in the testimony, counsel representing some #EndSARS protesters, Adeshina Ogunlana had argued that the state governor, Babajide Sanwo-Olu should have personally come before the panel to testify.

The chairman of the panel, Justice Doris Okuwobi had however held that the governor is not “compellable” because he has been conferred immunity Under Section 308 of the constitution.

Muri-Okunola’s testimony is coming against the background of a summons sent to him by the panel over the Lekki incident of October 20, 2020.