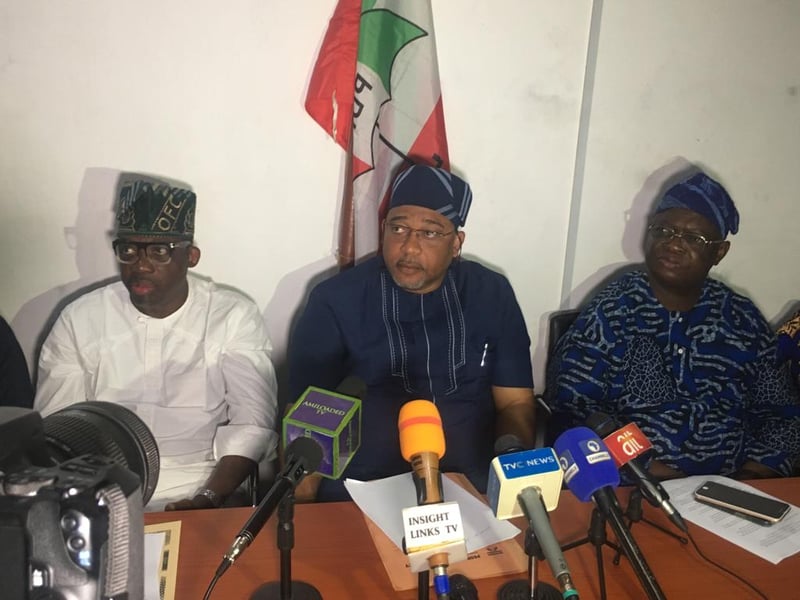 The Osun State chapter of the Peoples Democratic Party (PDP) has again expressed displeasure over the planned local government election in the state.

The PDP alleged that the plan to conduct the local government election in Osun State was plotted by the state governor, Adegboyega Oyetola, to desperately look for all corrupt means to cover itself.

The party also warned the Osun Independent Electoral Commission (OSIEC) not to be used as an instrument of destabilisation in the state.

The Osun PDP Caretaker Committee Chairman, Akindele Adekunle, made this known at a press conference in Osogbo on Tuesday.

The party according to Adekunle said the outgoing government is hellbent to conduct illegal local government elections knowing fully well what the constitution says about organising elections.

He maintained that they will do everything within their power to make sure that the illegal election did not hold.

Adekunle, however, called on the Inspector-General of Police, Usman Alkali Baba, and the Osun State Commissioner of Police to take proactive steps to nip it in the bud.

He said this was necessary as there was the likelihood of breach of the peace in the state as masses of the state are eager and ready to resist any action by the government to further impoverish them.

The Osun PDP which restated its call for the planned local government election to be stopped from holding in the state added that it conflicted completely with provisions of the law.

“You recall about two weeks ago that our great party, the PDP had raised the alarm on the clandestine plot by the outgoing Governor of Osun State, Mr Gboyega Oyetola to conduct an end-time election in the 30 local governments in the state. You also recall the immediate denial of such a plot through the Osun State Independent Electoral Commission, (OSIEC)

“We knew that the immediate denial by the OSIEC chairman, Otunba Oladitan was not sincere as he had the governor’s stern order to cause the election to hold, by all means, not minding its impropriety in the face of the law.

“The reason behind such blind rush for an election the same Apc government had refused to hold since the advent of Oyetola’s administration is not far fetched. The defeated government had soiled its hands in so much financial infractions and monumental corruption, especially towards the last election and therefore, is desperately looking for all corrupt means to cover its ass.

“For us in the PDP, we have advised the Osun State Independent Electoral Commission (OSIEC) not to allow itself to be used as a tool for illegality. We, as a matter of fact, sent a delegation to the Commission to tutor and enlighten them on the consequences of turning themselves into prisoners of another man’s desperation.

“We have asked them to stop the Local Government Election being planned by the state government because the election conflicts completely with provisions of the law."

Recall that OSIEC has through its chairman, Segun Oladuntan in a press conference on Monday stated that a local government election will be conducted in Osun State on Saturday, October 15, 2022.

Oladuntan in the press conference maintained that OSIEC was now operating the newly passed and assented Osun Electoral Act 2022 which was passed by the Osun State House of Assembly.

He also said the Commission also held parleys with the political parties to brief them on the process.

The PDP also in a reaction on Monday declared the local government election as an illegality targeted mainly at wasting resources of the state and to cover for some financial infractions by the outgoing APC government.

The party promised to use all lawful means including mobilising the masses of Osun State in peaceful protests against the illegal and atrocious plans of OSIEC against the state.

Last week, the party had called on the Inspector General of Police to arrest Segun Oladuntan, the OSIEC Chairman.