Ligue 1: Messi, Neymar, Mbappe Give Glimpse Of Attacking Threat In 5-1 Win Over Lorient 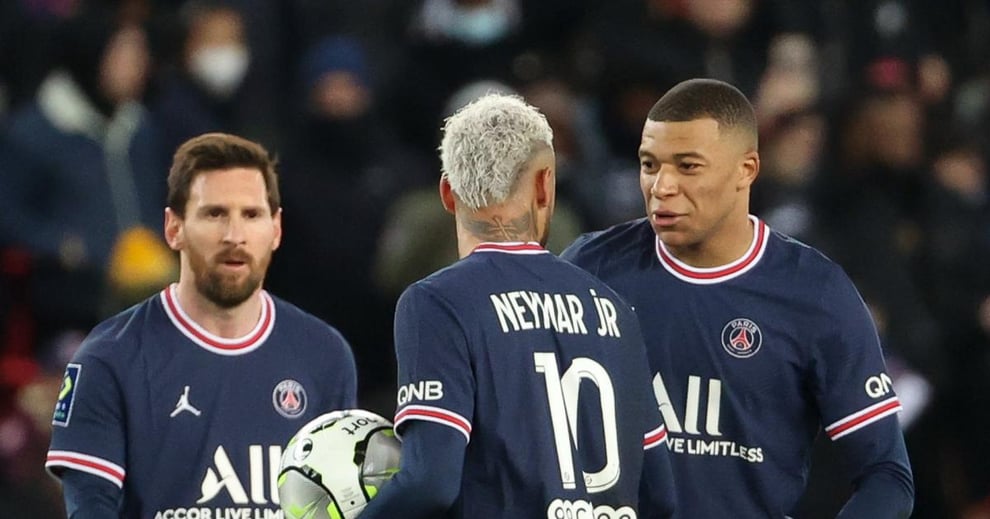 Kylian Mbappe, Neymar and Lionel Messi were all on the scoresheet as Paris Saint-Germain thrashed Lorient 5-1 at home on Sunday to edge closer to the Ligue 1 title.

After three defeats in four games before the international break and a traumatic Champions League exit, PSG began the end-of-season run-in with a crushing win at the Parc des Princes.

They lead Marseille by 12 points and need just 13 more from their final eight games to be assured of a record-equalling 10th French title.

"We've got to keep winning and show that we want to get this 10th title," Neymar told Prime Video.

"Losing is very difficult, that's what happened in Madrid. We have to keep moving forward. It really hurt us to lose (in Europe), we wanted to go all the way in the competition."

Messi and Mbappe combined to set up Neymar for the opening goal on 12 minutes as the Brazilian struck for just the sixth time in another injury-plagued campaign.

Mbappe then doubled the advantage with a neat finish inside the near post, but Terem Moffi gave Lorient hope early in the second half after punishing a defensive mix-up.

The Nigerian beat an uncertain Marquinhos to a loose pass from Achraf Hakimi, poking beyond Gianluigi Donnarumma.

With Lorient threatening to get back into the game, Mbappe restored PSG's two-goal cushion by drilling home from 20 metres to take his league goals tally to 17, one behind Monaco's Wissam Ben Yedder.

Mbappe teed up Messi to crash in a fourth via the underside of the crossbar on 73 minutes, moments after Sergio Ramos came on for a first appearance since January 23.

Neymar and Messi were both whistled by supporters in PSG's last home game. This time it was Ramos who was jeered following a nightmare first season in Paris blighted by a calf problem.

Mbappe nearly capped a sensational performance with a hat-trick, his shot grazing the post after a scorching burst into the box.

He instead turned provider in the final minute, exchanging passes with Neymar to send the Brazilian racing through to complete a 14th win in 15 home games for Mauricio Pochettino's side.