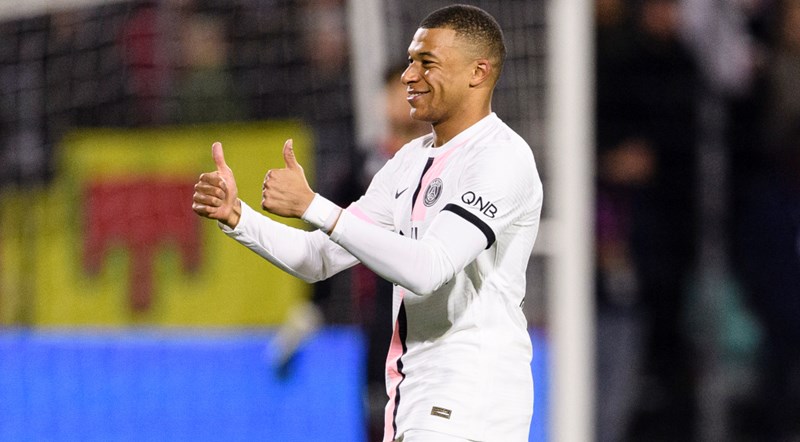 Kylian Mbappe and Neymar both scored hat-tricks as Paris Saint-Germain romped to a 6-1 thrashing of struggling Clermont on Saturday to move closer to winning Ligue 1.

Mbappe, who has still not decided whether he will stay at PSG beyond this season, scored twice and had three assists in last weekend's 5-1 rout of Lorient.

He added another assist and won a penalty in this game as he moved to the top of the Ligue 1 goalscoring charts with 20 goals this season.

Mauricio Pochettino's men are now 15 points clear of second-placed Rennes and appear certain to regain the title with only seven games remaining.

Clermont remain in 17th spot, just one point ahead of Saint-Etienne who occupy the relegation play-off place.

PSG only have Ligue 1 left to play for this season after being knocked out of the Champions League by Real Madrid, but put in a second straight impressive performance with Mbappe, Neymar and Lionel Messi in fine form.

"The Messi-Neymar-Mbappe combination? The problem is that a lot of people don't listen, since the start of the season we have been saying that it takes time to create an understanding between them, not only on the pitch but also in the dressing room," said Pochettino.

PSG took the lead in the sixth minute as Mbappe caused havoc in the home defence with a driving run off the left wing.

The ball eventually found its way to Messi, whose clever pass found Neymar and the Brazilian drilled the ball into the far corner.

The champions-elect doubled their advantage inside 20 minutes as Messi collected his 12th league assist of the season.

The seven-time Ballon d'Or winner volleyed the ball through for Mbappe, who prodded it past onrushing goalkeeper Arthur Desmas.

But Clermont gave themselves hope of an unlikely comeback shortly before halftime as Jodel Dossou bundled in at the back post to finish off a fine team move.

The capital giants dominated possession after the restart but struggled to create many chances, and needed goalkeeper Gianluigi Donnarumma to save Jason Berthomier's shot.

But the game was ended as a contest with 20 minutes to play, as Mbappe was brought down in the box by Akim Zedadka following a quick counter-attack and Neymar sent Desmas the wrong way from the spot.

Mbappe grabbed his second goal just a few minutes later, racing onto Neymar's brilliant pass to round Desmas and tap in.

PSG's fearsome front three combined for the fifth goal, as Neymar's back-flick found Messi, who played in Mbappe to curl a magnificent strike into the far corner.

The away side made it four goals in the space of 12 minutes with seven minutes remaining, as Neymar completed his first hat-trick since December 2020.

He was indebted again to Mbappe, who ran clean through but unselfishly squared to give his teammate the easiest of finishes.