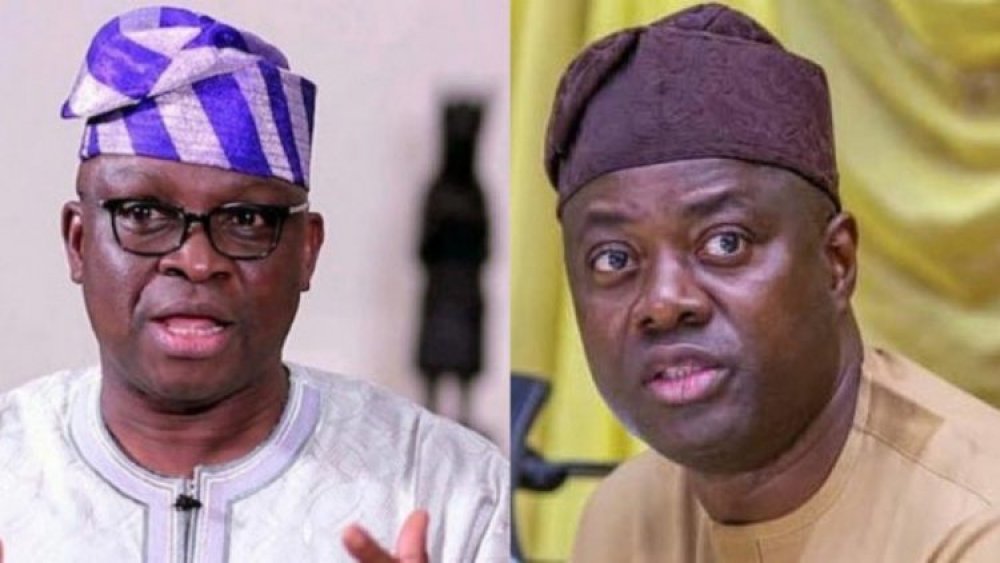 Governor Seyi Makinde of Oyo State has reacted to Ayo Fayose's comment about him and the Southwest Peopled Democratic Party (PDP) as deadly, wicked and malicious.

AllNews Nigeria earlier reported that the former governor of Ekiti State, Fayose had described Makinde as “wicked and deadly”.

Reacting in an interview with Channels TV, Fayose insisted that the election was rigged in favour of Arapaja.

While describing Makinde as quiet and deadly, he accused the Oyo governor of sending thugs to attack him.

But in a statement released on Thursday by his media aide, Taiwo Adisa, Makinde warned Fayose against spreading a false narrative about the South-West PDP Congress.

The statement read in part, “The South-West PDP zonal congress held in Osogbo has come and gone and there is no doubt that it will go down the history lane as one of the most peaceful PDP congresses in the zone.

“The peaceful conduct of that congress, one must say, followed the body language and actions of the leader of the party in the zone, Governor Makinde, a man renowned for being a peaceful politician.

“Despite the desperation and provocations from the Fayose camp, the governor maintained his calm and guided the zone to a peaceful congress that has now produced worthy leaders for the party.

“The governor made it clear from the outset that the congress was about rebuilding and strengthening the South-West PDP and he worked hard to ensure that the party puts its best forward, as, according to him, whatever happened in that congress had ramifications for the national polity.

“Governor Makinde had equally described the congress as a family affair, promising to work with anyone who emerged winner, with the climax of the Monday, April 12, 2021, event being the eventual acceptance of Governor Makinde as the leader of the South-West PDP by former Governor of Ekiti State, Mr Ayodele Fayose.

“One is, therefore, surprised that less than 48 hours after that acceptance and the commitment to work with Governor Makinde to build the party, the former governor is masterminding an assault against Governor Makinde over the peaceful congress in which the latter made it clear that there would be ‘no victor, no vanquished.

“One can see the ungodly pattern Makinde’s critics are following by trying to build a false narrative around the congress with a view to rubbishing it.

“It should, therefore, come as a surprise to the public that the same camp that claimed that it had conceded defeat and was ready to work with Arapaja, is now engaging in media warfare against the governor.

“In the morning of Wednesday, Mr Eddy Olafeso was on national TV to lay the foundation for what would be a sustained effort to tarnish the image of the governor. By evening, the cycle was completed by Mr Fayose, who also appeared on the same medium.

“This has proven that false alarm and deliberate falsehood are being deployed to rubbish an otherwise peaceful congress.

“While we would not like to join issues with Mr Fayose and those who contested against Ambassador Arapaja, over the outcome of the congress, we would like to caution that no one should attempt to impugn the personality of Governor Makinde, a peace-loving individual, who has never got anything by violence.

“The peaceful conduct of his campaign while running for office as governor of Oyo State is an attestation to this fact.

“Therefore, going on air to say that Governor Makinde is “quiet but deadly” is not only unstatesmanlike, it is also unguarded, malicious and wicked”.