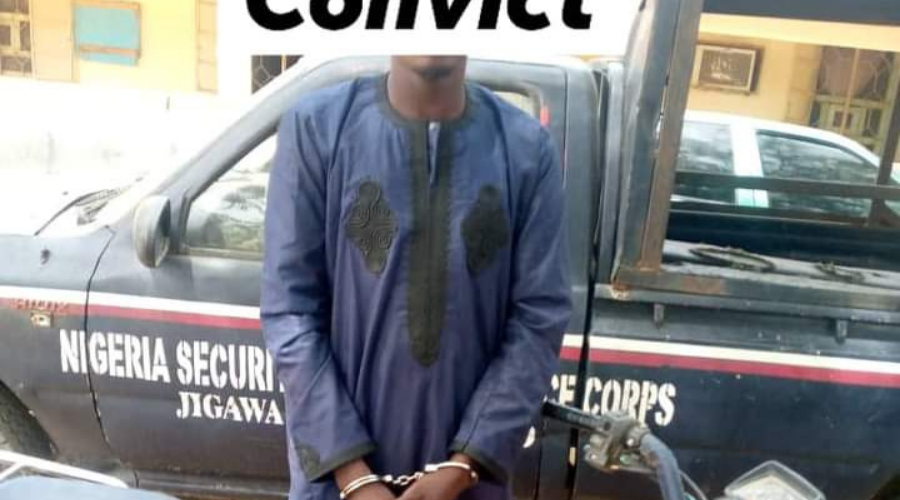 After found guilty, Zakari Yahaya was sent to six months in prison without option of fine

A Magistrate Court in Hadejia local government area on Thursday sentenced one Zakari Yahaya to six months imprisonment without option of fine.

Yahaya was arraigned before Chief Magistrate, Sa’idu Galadima by the Nigeria Civil Service Commission, NSCDC for allegedly stealing a motorcycle, an offence which is contrary to section 286 of Penal Code Law.

The culprit was arrested on Sunday, May 22, 2022, by personnel of NSCDC in Gujungu town, following a complaint lodged by one Tasiu Muhd of Shagari Quarters, Hadejia that he saw the suspect in possession of his Red Color Daylong Motorcycle.

Upon interrogation, the judge,  confessed to have stolen the motorcycle on Friday, 20th of May, 2022 at Shagari Quarters, Hadejia in front of a Mosque at about 2000hrs while the Night prayer (Isha) was ongoing.

He thereafter decided to dispose it at the popular Gujungu Market in Gujungu Town, Taura LGA which operates on Sundays but ran out of luck.

Upon pleading guilty to the charge, the Chief Magistrate, Sa'idu Galadima ordered that he be remanded in prison for six months.

A statement on Thursday, by CSC Adamu Shehu, CDPRO Jigawa State Command noted that the Daylong Motorcycle, valued at about N195,000 was since handed over to the legitimate owner by the court.