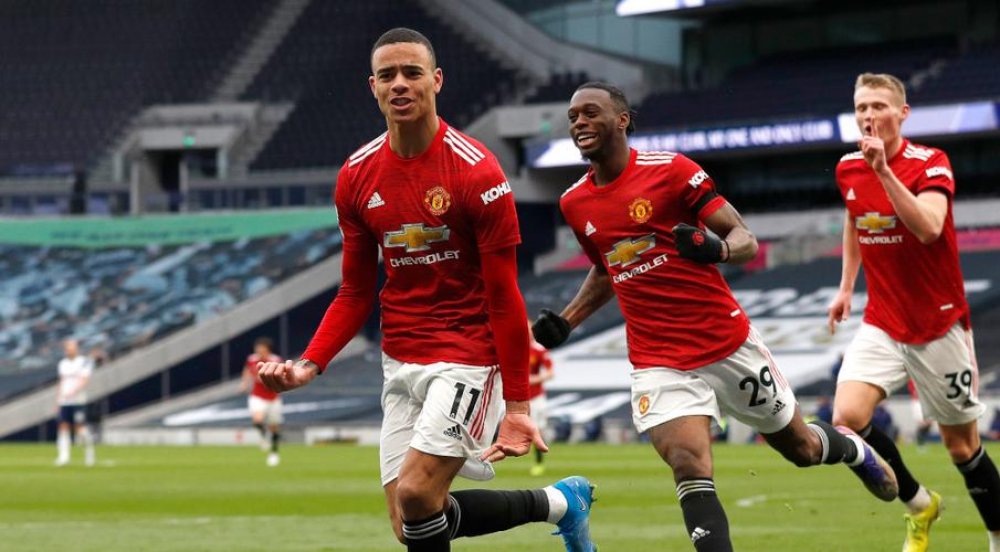 Manchester United fought back to complete an act of revenge over Tottenham in the season by dealing a body blow to the Spurs' hopes of a top-four Premier League finish with a 3-1 win at the Tottenham Hotspur Stadium on Sunday.

United came from behind to win for the ninth time in the league this season as second-half goals from Fred, Edinson Cavani and Mason Greenwood cancelled out Son Heung-min's opener.

Victory kept alive United's slim title hopes by cutting the gap on local rivals Manchester City to 11 points with a game in hand for Ole Gunnar Solskjaer's men to come.

Even if they do not manage to reel in City in their final seven games of the campaign, United opened up a nine-point cushion over fifth-placed Chelsea in the battle for a place in next season's Champions League.

Tottenham's hopes of a return to Europe's premier club competition are dwindling fast as they are now six points adrift of West Ham in fourth and could slip to eighth if Everton win at Brighton on Monday.

"Same coach, different players," was Jose Mourinho's explanation when quizzed last weekend why his side perpetually blow leads compared to the ruthless teams he has managed in the past.

Tottenham have now lost 18 points from winning positions in the Premier League this season.

The last time they came from behind to win in the league was when they thrashed United 6-1 at Old Trafford in October.

By contrast, United have picked up 28 points after falling behind, although they only did so this time after controversially having a goal ruled out.

Paul Pogba and Cavani combined brilliantly for the Uruguayan to drill the ball low between the legs of Hugo Lloris.

However, the goal was ruled out after a VAR review by referee Chris Kavanagh for a foul by Scott McTominay on Son in the build-up.

The Scottish international made minimal contact with Son's face as he swotted the South Korean aside.

Tottenham's claims for a double punishment were ignored by Kavanagh, though, as McTominay escaped without being shown a second yellow card.

United's fury was compounded four minutes later when Son had bounced back up to give Tottenham the lead.

Harry Kane freed Lucas Moura in on goal and the Brazilian unselfishly squared for Son to slot home his first Premier League goal in over two months.

However, Solskjaer's men fuelled their anger to produce another second-half fightback.

Lloris had to be down sharply to his left to parry a warning shot from McTominay.

United deservedly got their equaliser on 57 minutes. A fine team move saw Fred feed Cavani and after Lloris saved his initial effort, the Brazilian fired into the roof of the net for just his fourth goal in three seasons since joining from Shakhtar Donetsk.

Dean Henderson justified the faith Solskjaer has shown in promoting him ahead of David de Gea with smart saves with his feet to prevent Son and Kane from restoring Tottenham's lead.

At the other end, Lloris also produced a brilliant stop from Bruno Fernandes's dipping strike from outside the box.

Lloris was powerless 11 minutes from time, though, when substitute Greenwood whipped in an inviting cross for Cavani to power into the bottom corner.

Greenwood then continued his return to form by smashing past Lloris at his near post in stoppage time.