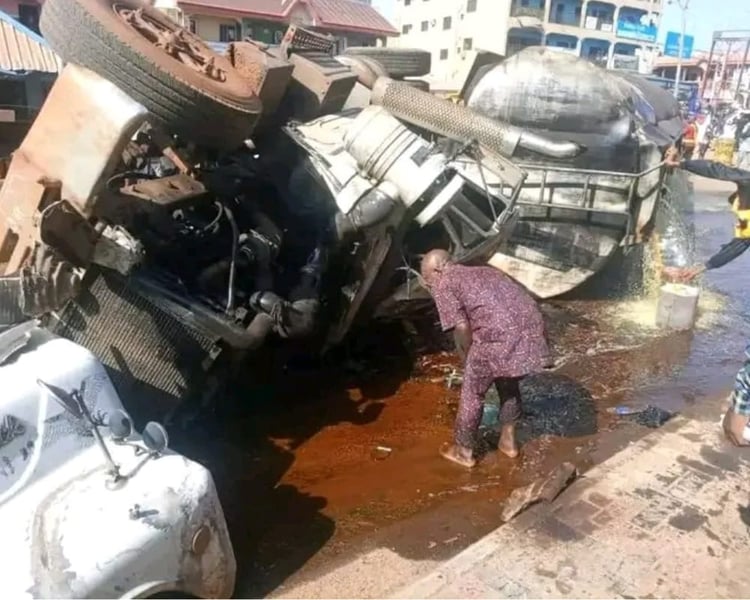 Many people escaped death on Wednesday in Awka, Anambra State after a tanker carrying petrol spilled its content at a busy area in the capital.

The incident caused panic as passengers, drivers, hawkers and others around the area scampered for safety.

Explaining what led to the incident, the truck driver, Kingsley Ogu, said that he was carrying palm kernel oil used for soap making and not a petroleum product.

Ogu, who said he was coming from the Amansea axis of Enugu/Onitsha Expressway to Onitsha, said he was trying to avoid hitting a bus with an Anambra government registration number when he veered off the road.

“As I tried to avoid the bus, my tyres accidentally climbed the pavement by the road and suddenly resulted in the truck falling,” he said.

Ogu disclosed that  his truck was carrying 33,000 litres of palm kernel oil for industrial use and was heading to Onitsha.

A witness said the driver, with the registration number Anambra UKP 771 YA avoided hitting an 18-seater bus carrying a team of Anambra State Revenue task force patrol team when the accident occurred.

“The driver of the truck had struggled to control the vehicle in vain after the bus delayed in leaving his way as he descended the road, which is a bit sloppy”, the source, who identified himself as Chinedu, said.