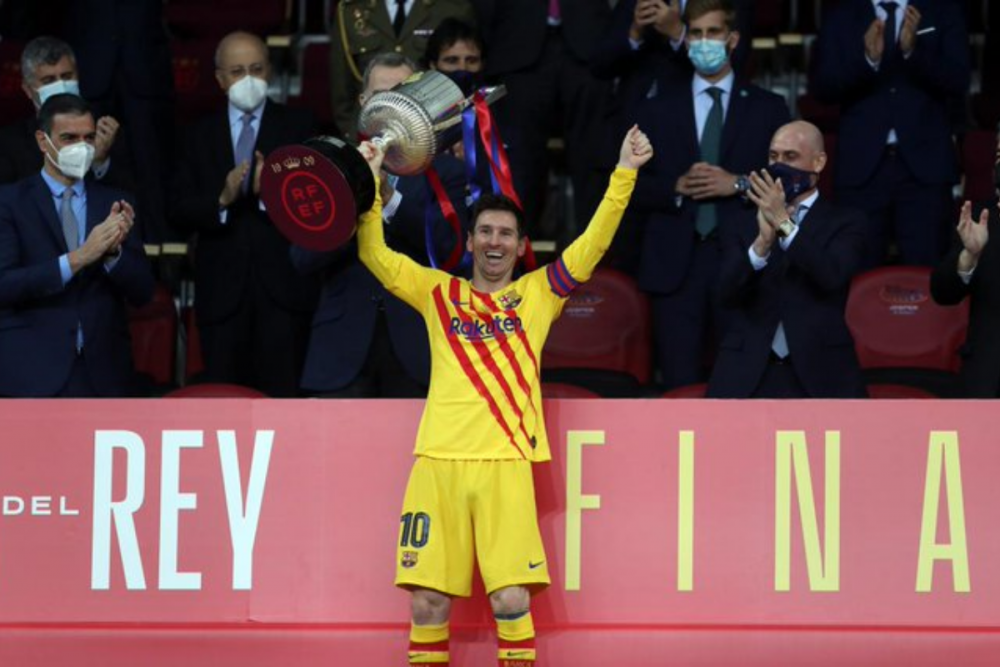 Lionel Messi inspired Barcelona to their first major trophy in nearly two years as they thrashed Athletic Bilbao 4-0 in the Copa del Rey final on Saturday for the 31st time in the club's history.

French forward, Antoine Griezmann put a dominant Barca side ahead on the hour when he turned in a cross from Frenkie de Jong, who later doubled the Catalans' lead three minutes later.

Messi suffered paid Athletic back after he suffered some rough tackle from them -- with a spectacular goal in the 68th, tearing his way through the defence down the right-wing and combining with De Jong before dancing around another defender to slot home.

Barca's captain struck again four minutes later in his 10th Copa final when he met a low ball in from Jordi Alba and fired the ball into the bottom corner, his shot proving too powerful for Athletic keeper Unai Simon.

Griezmann thought he had grabbed Barca's fifth goal in added time but his effort was ruled offside after a VAR review.

"It's very special to lift this Cup as captain of this club, it's a very happy day for this group," said Messi.

"We knew Athletic would play as they did and we had to be patient with the ball and try to create space. We were all over them in the first half and in the second they dropped off."

The Argentine hoisted the trophy for a seventh time -- his 35th trophy as Barcelona player while Dutch coach Ronald Koeman earned his first piece of silverware as Barca coach to add to the glut of honours he won as a player with the club, including a Copa triumph in 1990.

Koeman also won the Copa in charge of Valencia in 2008.

There was a strong sense of deja vu for Athletic, who have now lost four Copa finals to Barca since 2009, with Messi scoring each time.

The Basques have lost their last six appearances in the final and only two weeks ago were beaten 1-0 by Real Sociedad in the rescheduled 2020 showpiece, which was also played at an empty La Cartuja stadium in Seville.

"This is a very tough moment for us," said Athletic left-back Mikel Balenziaga.

"We were really looking forward to the game but they were superior from the first half. We managed to survive that but then we lost focus and they were much better than us and we had no chance."

Barca were hurting from last week's 2-1 La Liga loss to title rivals Real Madrid but took the initiative with 79% of possession in the first half and almost went ahead when De Jong struck the post, with Messi later smashing a shot just wide.

Athletic had beaten Barca 2-1 after extra time in January's Spanish Super Cup final but showed little ambition here and had only one attempt in the first half when defender Inigo Martinez prodded just wide of the near post following a free-kick.

Athletic keeper Simon pulled off three impressive saves in quick succession early in the opening period, using his left leg to thwart Griezmann and then Sergio Busquets from point-blank range while also keeping out a driven shot from Pedri. Griezmann finally got the better of Simon to break the deadlock and once Barca were ahead they showed no mercy.