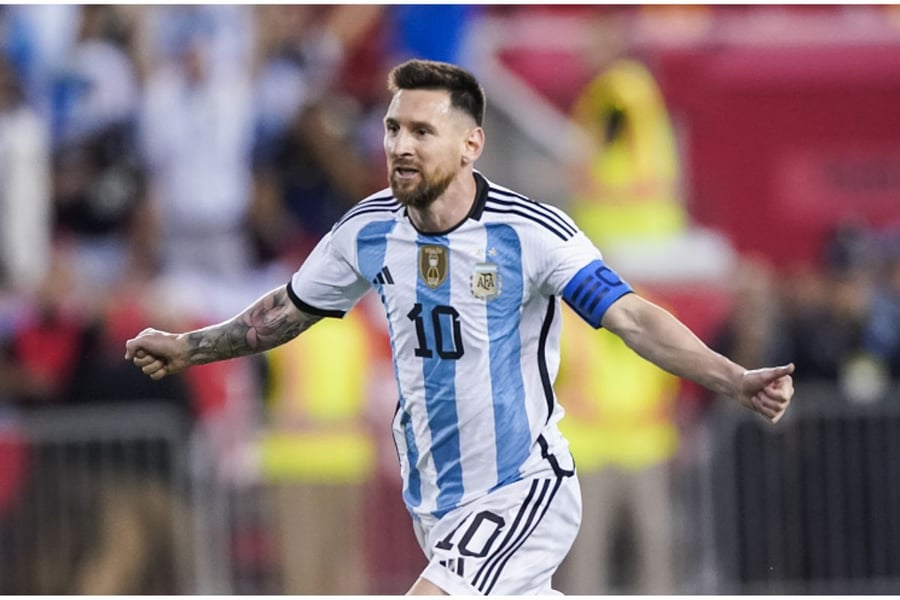 Lionel Messi marked his 100th international victory with two goals as Argentina edged closer to Italy's world record unbeaten streak with a 3-0 defeat of Jamaica in a World Cup warm-up friendly in New Jersey on Tuesday.

Paris Saint-Germain superstar Messi took his international goals tally to 90 in 164 appearances after coming on as a second-half substitute at the Red Bull Arena.

Messi's goals capped an emphatic win for the South Americans, who have now gone 35 games unbeaten in a streak stretching back to 2019 – just two shy of Italy’s world record unbeaten run of 37 set between 2018 and 2021.

Messi, who also scored twice during a friendly win over Honduras in Miami on Friday, delighted the crowd with an electrifying cameo after coming on in the 56th minute for Inter Milan's Lautaro Martinez.

He bagged his first of the night in the 86th minute, darting forward before caressing a shot into the bottom corner past Jamaica goalkeeper Andre Blake.

The 35-year-old seven-time Ballon D’Or winner then produced an impish second goal, craftily curling a low shot underneath the Jamaican wall into the bottom corner from a free-kick.

Messi's presence left the crowd in a frenzy. On three different occasions, spectators sprinted onto the pitch in an effort to get close to the Argentinian icon.

One shirtless fan attempted to get Messi to autograph his back before he was bundled to the floor by security staff.

Messi's late double crowned another assured performance from Lionel Scaloni's Argentina, who are rapidly emerging as one of the favourites for the World Cup in Qatar in November.

The Argentinians had dominated throughout a one-sided first half and took the lead on 13 minutes when Martinez jinked past Jamaica's Damion Lowe and cut back for Manchester City’s Julian Alvarez, who tucked away a low finish from close range.

Alvarez almost had a second soon afterwards but curled his shot just wide.

Midfielder Guido Rodriguez also went close but was unable to direct his volley at the back post on target, instead shooting over the bar.

Giovani Lo Celso also threatened with a long-range effort that flew just wide of the top corner in the 33rd minute.