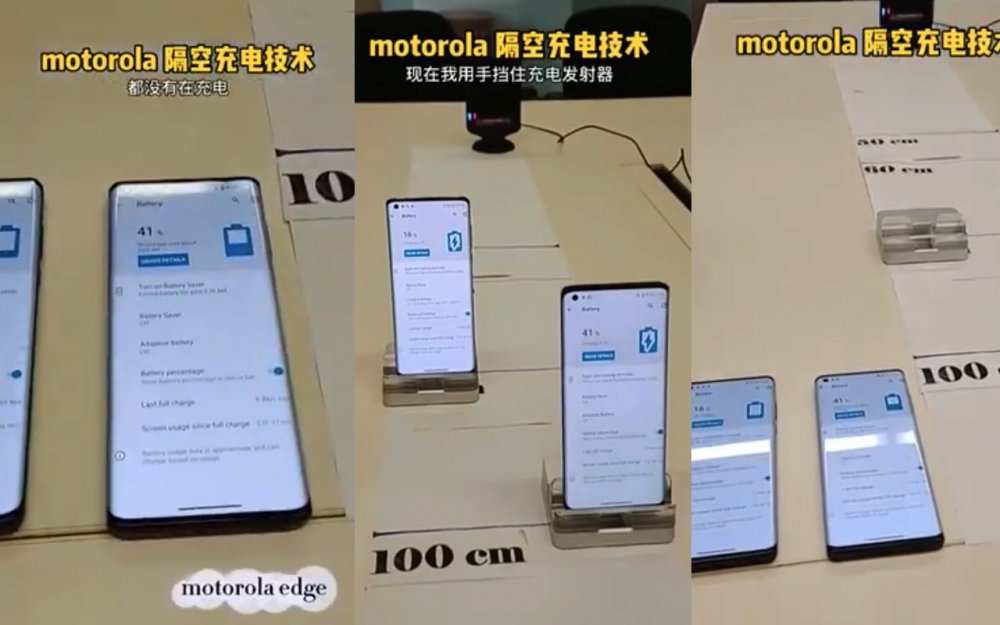 The long wait has finally ended as Motorola has followed the footsteps of Xiaomi to finally show off its own long-range wireless charging system. People have been waiting all years for an air charging solution, but they end up getting two

This form of "air charging" has been talked about for a number of years, effectively using a beam of energy to charge devices. It avoids the chore of having to place a phone in a perfect position to get it to charge, instead, allowing charging of devices just within a particular area.

Imagine, for example, that you could just put your phone or watch down in the kitchen and they'd be charged. That's the long-term aim of these systems, or even better, passive charging of devices when it's needed, rather than having to stop and deliberately charge a device because it's running low.

The Motorola demo has been posted to Weibo and isn't a polished showcase like we've got from Xiaomi. The device doing the charging appears to be labelled Motorola One Hyper, although that won't be a marketable name, because there was a 2020 phone launched under that name.

The Moto demo shows two Motorola Edge devices being charged, one at 100cm and one at 80cm. It appears to be using the existing Qi wireless charging system in these devices, which would add appeal because you could then just buy this type of charger and have a range of devices benefit.

During the demo, a hand is placed in front of the charger, and the wireless charging stops, which perhaps raises more questions than it answers, but it does tell us that you'll need fairly close proximity and line of sight - we imagine that it's quite a low power solution.

With both Xiaomi and Motorola showing off similar technologies, it feels like we could be seeing this type of charging device getting a commercial launch fairly soon. Exactly how customers will react remains to be seen but the biggest questions will likely be around safety and what impact it will have on the rest of the environment it will be placed in.