MPR Stays At 11.5% As CBN Releases Its MPC communique 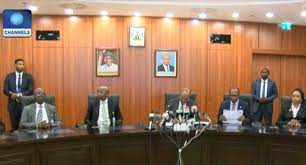 After an extensive session of the nation’s monetary authority which rounded off yesterday, November 23, 2021, the CBN through its Governor-Godwin Emefiele released its communique today.

The apex bank after careful review of the macroeconomic indices of the country decided to retain the MPR at 11.5 percent.

It also decided to retain the asymmetric corridor of +100/-700 basis points around the MPR.

It also concluded to retain the Cash Reserve Ratio (CRR) and Liquidity Ratio at 27.5% and 30% respectively.

“At this meeting, MPC was gratified that its policy actions in the past had started to yield positive results given the remarkable improvement in GDP which stood at 4.03 percent during Q3 of 2021 and the 6th consecutive month moderation in inflation to 15.99 percent in October 2021.”

“Given the level of its conviction about the efficacy of its actions on macroeconomic variables, MPC felt that whereas tightening would further help to rein in inflation aggressively, it nevertheless feels that tightening will increase the cost of funds and constrain output growth.”

“On the other hand, whereas loosening will lower policy rates, ease liquidity pressures, and stimulate additional credit creation which will boost output growth, MPC also thinks that loosening will further widen the negative real interest rate gap and compound the price distortions in the money markets which could fuel inflationary pressures", the governor said

As for whether to hold its existing stance, MPC believes that the existing monetary policy stance has supported the growth recovery and should be allowed to continue for a little longer for consolidation to achieve the MPC mandate of price stability that is conducive for sustainable growth.

The committee also feels that a hold stance will enable it to carefully appraise the implications of the unfolding global development around policy tapering and normalization by advanced economies.

Based on the foregoing, the committee decided to hold all policy parameters constant to support the enabling environment for sustained recovery.” Godwin Emefiele, the Governor of the CBN concluded.

When contacted our in-house analyst praised the MPC for retaining the MPR at 11.5%.

He said that “looking at the sustained investment from the CBN and the Ministry of Finance on key non-oil sectors of the economy I am confident that revised growth of 6.9% is very achievable”

Expect us to dissect more from the communique released from the MPR meeting in the coming days.