The Muhammadu Buhari administration prides the N-Power scheme which is targeted at youths, as one of its major achievements.

Over 14, 000 former N-Power beneficiaries are still at a loss regarding their five-month outstanding stipend arrears, AllNews reports.

Despite the promise by Sadiya Farouq, the Minister of Humanitarian Affairs, Disaster Management and Social Development of Nigeria, to pay all outstanding stipends of exited N-Power beneficiaries before the end of 2020, the Nigerian youths are still yet to get paid - eight months after her pledge.

It would be recalled that Farouq had in a tweet on her verified Twitter handle in October 2020 assured N-Power batches A and B beneficiaries with “legitimate claims” that they’d be settled their arrears before the start of 2021. However that promise – like many pledges by Farouq and numerous Nigerian politicians – remains empty, AllNews' findings through communication with several Batch A and B beneficiaries revealed.

“All legitimate claims and those on verified list will be paid before the end of the year,” Farouq had stated in October 2020.

The non-payment of 14, 200 N-Power Batches A and B beneficiaries means that the Ministry of Humanitarian Affairs, Disaster Management and Social Development, as well as the Ministry of Finance, Budget and National Planning, have failed to account for N2,130,000,000 (two billion, one hundred and thirty million naira).

The Ministry of Finance is the governmental organisation that releases money meant for the payment of N-Power volunteers to the Ministry of Humanitarian Affairs and Disaster Management. However, as at the time of publishing this report, AllNews cannot independently verify if the Ministry of Finance had released the fund and if Hajia Farouq is the one deliberately holding on to public money without reason.

Remarkably, the Ministry of Humanitarian Affairs, specifically, is trying to silently sweep aside the issue of the money, AllNews reliably gathered from insiders.

The Ministry of Humanitarian Affairs is saddled with the responsibility of facilitating the National Social Investment Programme (NSIP) of the Federal Government. 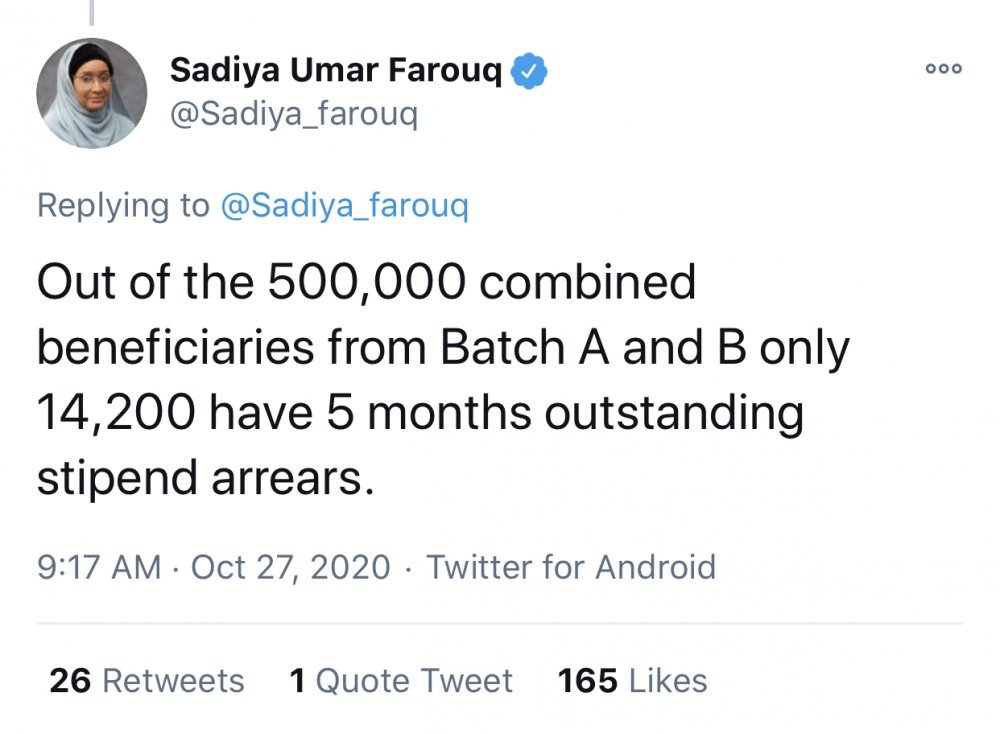 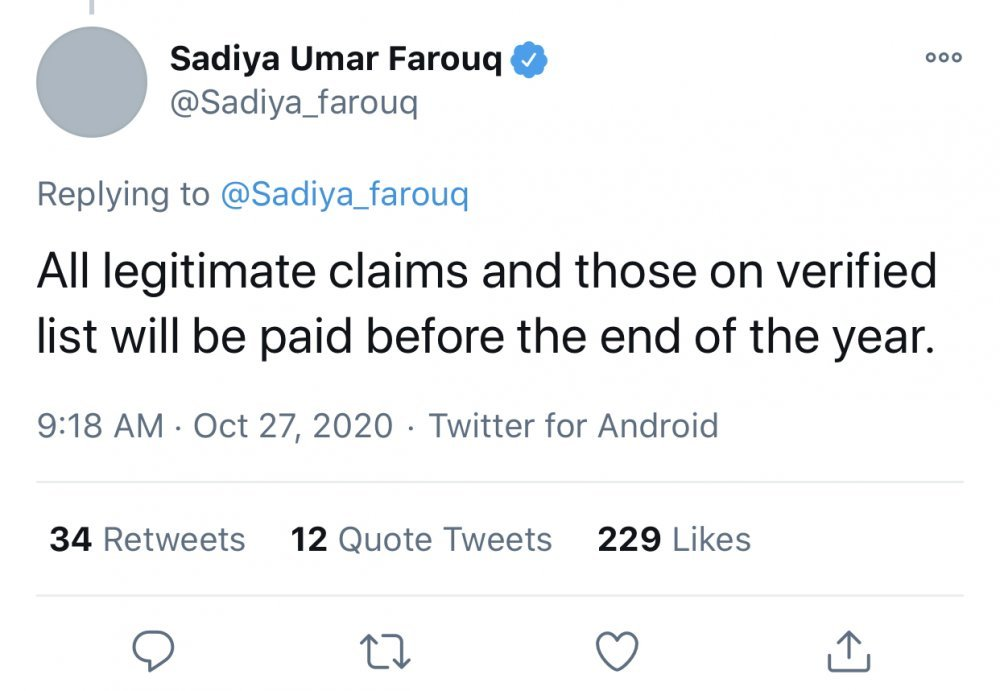 How much was expended by FG as remuneration on N-Power graduate beneficiaries?

During the period N-Power Batches A and B beneficiaries were enrolled, every month, the FG spends about N15 billion as stipends on nearly 500,000 volunteers.

The Muhammadu Buhari administration prides the N-Power scheme which is targeted at youths, as one of its major achievements. It says it is one of the largest post-tertiary job schemes in Africa.

The NSIP (an initiative the N-Power scheme is one of its elements), which was formerly under the office of the vice-president, Prof. Yemi Osinbajo and managed by Hajia Maryam Uwais, special adviser to the president on social intervention, was moved to the ministry of humanitarian affairs, disaster management, and social development on October 1, 2019.

The N-Power scheme had sub-components as N-Teach, N-Agro, N-Health and N-Health.

About 26,000 non-graduates in the N-Build, which consist of automobile, hospitality and technology categories have been trained in 36 states and the Federal Capital Territory (FCT).

While Batch A graduate beneficiaries were exited in June 2020, their Batch B counterparts, who came on onboard in 2018, were withdrawn from the programme in July 2020.

Earlier, Nneka Ikem Anibeze, the Special Assistant on Media and Publicity to Minister Sadiya Farouq, blamed non-payment of stipends on “discrepancies in records of the beneficiaries”. This was in the fourth quarter of 2020. 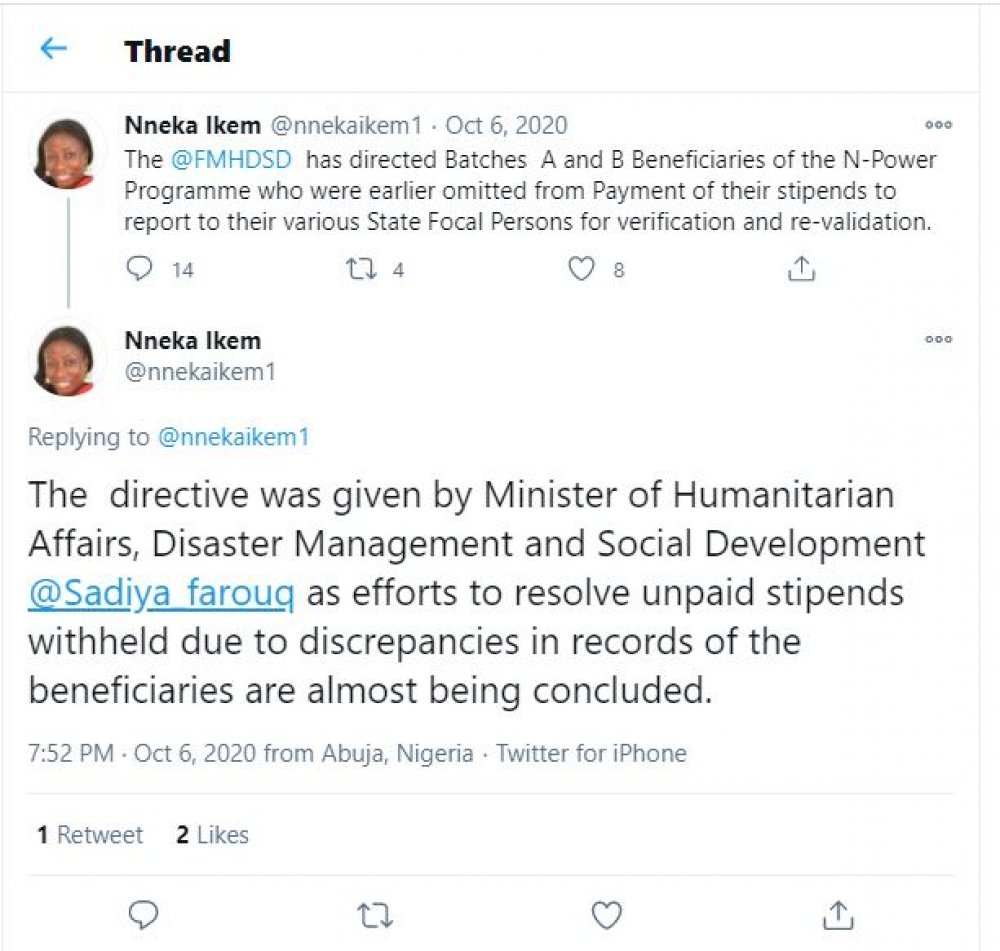 At the time, Farouq had directed that opportunity be given to the affected beneficiaries to verify and re-validate their eligibility so that qualified beneficiaries can be paid for their participation in the N-Power Programme. 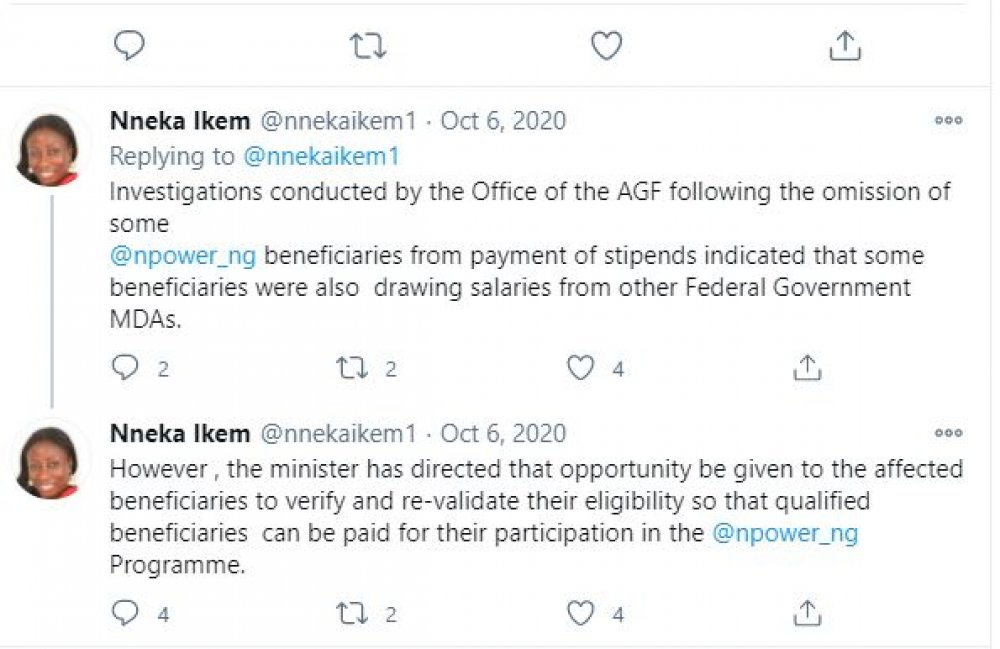 But a Lagos-based N-Power Batch A beneficiary, who simply identified himself as Oluwaseyi, elucidated events when beneficiaries with stipends' complaints reported to their various State Focal Persons for re-validation.

According to him, “They [Nigerian authorities] called us for verification at Alausa.

“There are some they are owing more than five months, some six months. It depends.

“They called us to come to Alausa, October last year for verification, and the place was crowded, many people, that they were owing six months, seven months, one year. So it depends.

“We that they were owing June stipends also showed up for the verification too.

“They sent someone from Abuja to come and do the verification with us.

“They ask us to come with bank statement, to prove that we are being owed.

“When we got there and they saw that we were too much, they asked us to write a letter.

“At Alausa that day, we were plenty.

“They asked us to write our Batch, N-Power Volunteers Network (NPVN) ID, and stuff like that. Then how much we are being owed.

"Intentionally withholding the N-Power payments is wickedness. After all the October 'wahala', and now this.

"I don't even think this woman (referring to Farouq) has human sympathy at all," Chukes King, a Batch B beneficiary who is based in Abia State also lamented to AllNews.