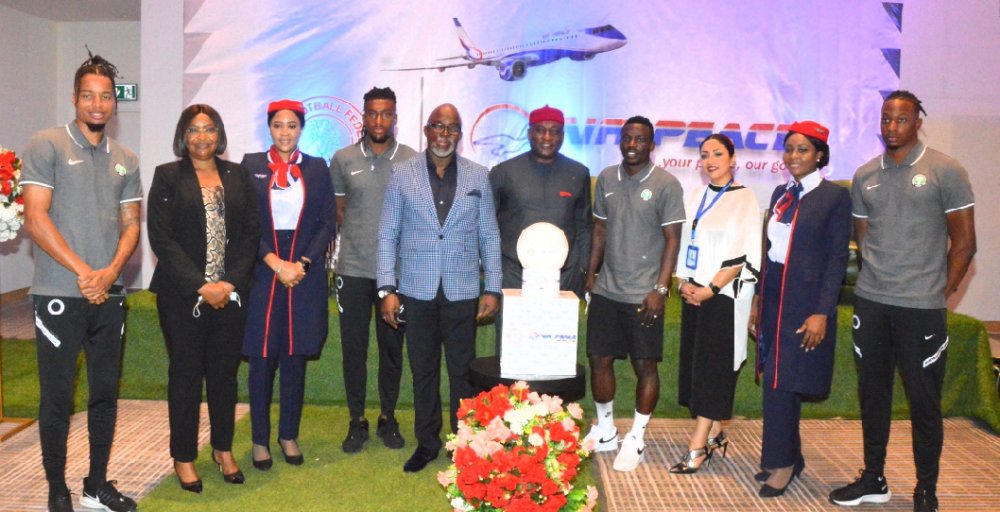 Air Peace on Wednesday in Lagos signed a four-year contract with the Nigerian Football Federation (NFF) as the official airline of the  national football team.

NFF President, Amaju Pinnick, who led an NFF team for the signing, praised the management of Air Peace for support and partnership toward building a united Nigeria.

AllNews reports that the partnership is hoped to usher in a new phase for football in Nigeria.

Pinnick said the four-year contract was supported with N300 million to develop football.

According to the NFF president, the airline is investing N200 million in cash and N100 million in other forms of support.

Pinnick said that with the partnership, the national football team would be flying in the airline’s new aircraft for  away games in the next four years.

“We now have an official plane to fly the team to and from away games. It is one of the newest planes in the world.

“We are working very hard to ensure that the players in the EPL travel with us to Cape Verde.

“Air Peace has been at the vanguard of promoting national peace and unity.

“We decided to partner with the airline because it is truly nationalistic,” he said.

Pinnick described the Chairman of Air Peace, Allen Onyema,  as a great nationalist.

He promised that NFF would abide by the terms of the contract.

Responding, Onyema said that Air Peace  was supporting Nigerian football in spite of the challenges in the aviation industry.

According to him, the support is meant to rekindle unity, love and brotherhood among Nigerians.

Onyema urged Nigerians to believe in the country and work toward the betterment of the society.

“I am proud of the NFF president’s efforts.

“We should embrace and promote a united Nigeria irrespective of ethnicity, religion culture and tradition.

“We should come together to support the administration of President Muhammadu Buhari.

“This present government has impacted more indigenous companies; Air Peace is a  beneficiary,” he said.

The Air Peace chairman said that the administration assisted airline operators much through abolition of some  levies.

He said that Air Peace would fly the Super Eagles to Cape Verde  in its new aircraft.

Onyema said the airline was committed to supporting the national team and Nigerians.

“Air Peace has been at the vanguard of sponsoring clubs and local leagues,” he said.

Onyema appealed to investors and corporate organisations to support the national team as part of  corporate social responsibility.