Niger Governor Advocates For Next APC Chairman From North Central 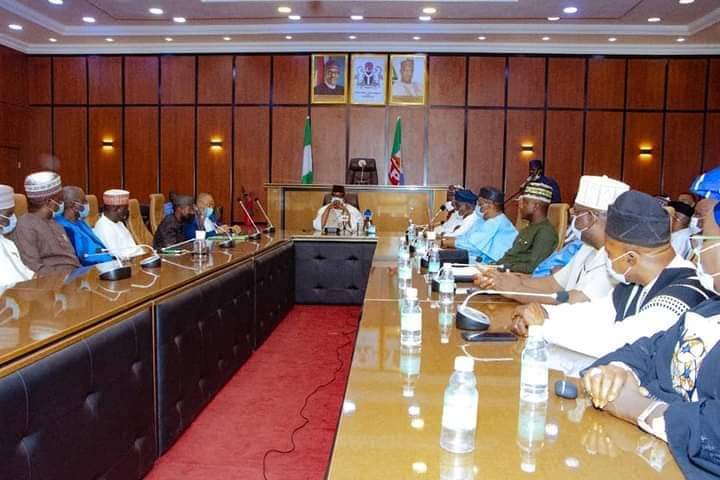 Niger State Governor, Abubakar Sani Bello has stated that he is working relentlessly  with his colleagues to make sure the next National Chairman of the All Progressives Congress (APC) comes from the North Central.

Governor Bello disclosed this on Monday, at Government House, Minna during an interaction with Senator George Akume's contact Group.

The Governor asserted that with the convincing résumé of Akume as Benue State Governor for two uninterrupted tenures, distinguished Senator of the Federal Republic of Nigeria for 12 consecutive years and current status as Minister of the Federal Republic of Nigeria, he is extremely convinced that the former Chairman, Northern Governors Forum will reposition APC to the satisfaction of all and sundry if his desire sails through.

Earlier, Chairman of the high powered delegation and Second Republic Senator, Jacob Tilley Gyado persuaded the Governor to see Akume as a core progressive and selfless politician who is adequately prepared to man the affairs of the ruling party for a better Nigeria.

Also speaking, the Chairman, Benue APC Elders Council, Simon Shango thanked Governor Bello for granting the Contact Group audience, and declaring support for the North Central region. On behalf of the team, elder Shango however, appealed to the Governor to go beyond micro zoning and throw his weight particularly on Senator (Dr) George Akume to be unveiled as the APC National Chairman.

The Governor happily revealed that since he assumed office in 2015, yesterday was the first time he received in his office such a team with notable and highly placed Nigerians.

Governor Bello also commended Akume for being a very humble and generous gentleman everybody will certainly like to work with.

"Senator Akume is a great man who has helped many Nigerians. I also appreciate the sacrifices he has made for the existence and growth of our party"

On his part, the Emir of Minna, His Royal Highness, Alhaji (Dr.) Faruq Umar Bahago described the former Senate Minority Leader as a selfless servant, all well-meaning Nigerians are expected to support for any public office he aspires to occupy.

The Emir showered praises on the Honourable Minister, Special Duties and Inter-Governmental Affairs when the delegation moved from Government House to his Palace to pay homage. The Emir promoted the Tiv people as great citizens who have contributed their quota for the development of Nigeria.

Governor Bello earlier presented an album to Senator Akume to dissect and know much about Niger State, while His Royal Highness, Dr. Faruq sent two baskets of cola nut for the Honourable Minister as appreciation for his visit.