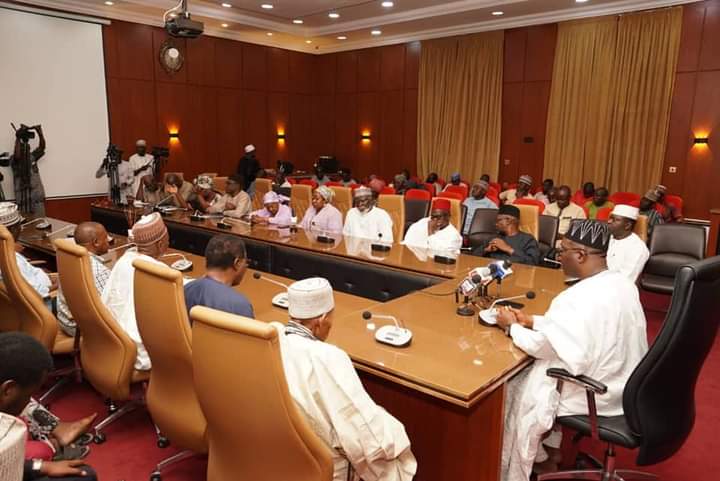 Clerics in Niger state praying for the state governor

The Niger State Commissioners Forum has organised a prayer session for Governor Abubakar Sani Bello to succeed as the Acting Chairman of the All Progressives Congress (APC) Caretaker/Extraordinary Convention Planning Committee (CECPC).

The special prayer session was organised by the forum on Wednesday at the Council Chambers of the Government House, Minna.

Mamman Musa, Chairman, Commissioners Forum, and Commissioner for Works and Infrastructural  Development, said divine help from God was needed for the Acting Chairman of the APC CECPC to succeed.

Alhaji Musa assured that the absence of the Governor would not be felt negatively in the state as the Forum and other key Government officials were equal to the task of running the affairs of the state.

Responding, the State Deputy Governor, Ahmed Mohammed Ketso said that the emergence of his Boss as the Acting Chairman APC CECPC is an act of God.

Ketso who presided over the prayer session acknowledged that prayers are what  Abubakar Sani Bello needs to guide and sustain him in his new national assignment.

"His elevation is an act of God. And we as his subordinates, there is nothing we can offer to sustain and strengthen him in that position than prayers.

"May Allah guide him and give him the necessary wisdom to make the right decisions for the growth and development of our party", he said.

The Deputy Governor commended the Commissioners Forum for their foresight in organising the event.

nhey are optimistic that the Acting Chairman APC CECPC would do his best to ensure a hitch-free and successful National convention of the Party.

The special prayer session which had many clerics was led by the State Chairman of Imam Forum and Chief Imam of Minna Central Mosque, Sheikh Ibrahim Isah Fari, and the Chairman of the  Christian Association of Nigeria (CAN) Niger State Chapter, Reverend  Mathais Echioda.