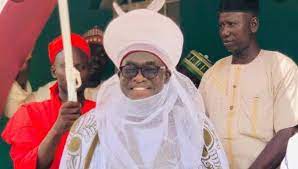 The Emir of Agaie of Niger State, Alhaji Yusuf Nuhu says his emirate would not condone early or forced marriage.

The Emir who disclosed this shortly after a sensitization campaign on Gender-Based Violence (GBV) on Saturday, in Agaie Local Government Area of Niger State, said he has rescued two girls from their parents who wanted to force them into early marriage.

According to the Emir, the girls are currently in his custody and will not release the children to their parents until they allow the girls to marry the men of their choice.

“Here in my emirate, I preach against early and forced marriage, currently, I have two girls under my custody whose parents wanted to force into marrying men they didn’t love.

“Until their parents agree to allow them marry the men they love, I will not release the girls. This is because if they are forced into the marriage, they might not live in peace as husbands and wives due to lack of love.

“As parents, we must learn to respect the option of our children and we have been preaching on that which to some extent is yielding results,” he said.

He emphasized that it is important for parents to respect the wishes of their children, especially when it comes to who they want to marry.

Speaking on the campaign, he described it as “key and timely” as it would complement the efforts of the council in sensitising members of the area against child abuse, early marriage and domestic violence.

Earlier in her welcome address, Hajiya Mairo Mann, Chairperson of the state GBV Advocacy Committee, advised parents to open up on violence perpetrated against them and their children in order to get justice.

She said the sensitization campaign was to enlighten and educate parents and children on GBV and the appropriate steps to take when confronted by such a situation.

Mann advised parents and guardians to be up to their responsibilities by training their children on the right part as well as monitoring the peer groups their children associate with.

Also, Malam Mustapha Yunusa, Director, Child Development in the state Ministry of Women Affairs, said the sensitisation was to educate parents on response and preventive steps to GBV such as what to do to help victims in terms of medical attention and financial assistance.

In her remarks, Hajiya Tallatu Ekawu, Officer in Charge of Women Development in the Council, lauded the committee for bringing the sensitisation campaign to the area which had further expanded their knowledge and opened their eyes on what GBV is all about.