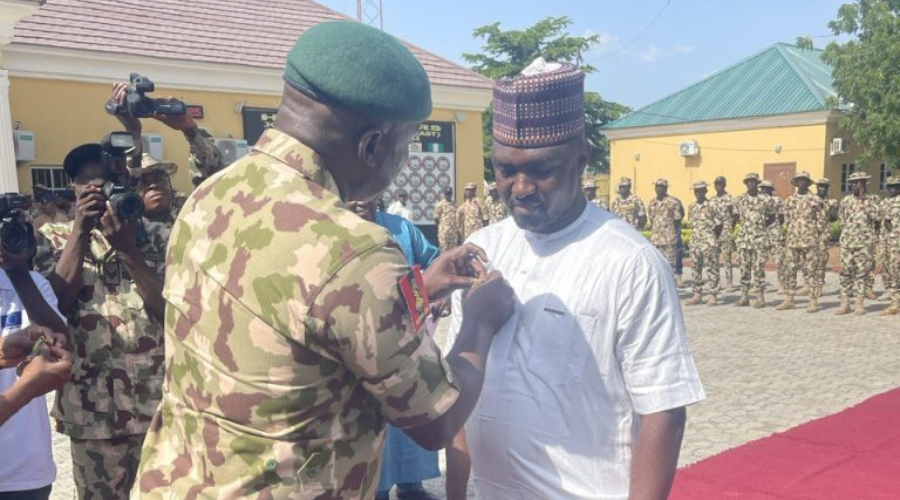 Kano based Nigerian  Broadcast journalist, writer, reseacher. You can reach out via aishaah[email protected]

The theartre commander also presented letters of honour and  commendation to five officers of Operation Hadin Kai JTF, who, according to him demonstrated exceptional bravery, dedication and commitment in the fight against Boko Haram insurgents.

Other recipien’s included journalists who have demonstrated critical roles in their reportage towards the fight against terrorism in the region.

“They included Hamza Suleiman of the News Agency of Nogeria(NAN), Ndahi Inusa of Vanguard Newspapers, Haruna Dauda of VOA, Sadiq Abubakar of Blueprint Newspapers, Patrick Mark of AIT,  Timothy Olanrewaju of The Sun Newspapers and Ahmed Mari of Champion Newspapers.

He tasked them to continue the professionalism to help end the war.

“We as people of Operation Hadin Kai who are building this nation together where peace and justice reins, sadled our fatherland with love strength and faith bounded by freedom and unity shall continue to conquer.

“On behalf of His Excellency, the President of the Federal Republic of Nigeria and the Commander in Chief the Armed Forces, President Muhammadu Buhari, I wish to congratulate everyone for us recording another milestone, which is the sixty second anniversary of our independence and earning the medal of honour to our participation and gallantry.

“Operation Hadin Kai is a joint Operation which is designed for every one of us to play a role in ending all forms of insecurity in the North East. It consist of military, para-military, government and non-governmental organisations, the civil populace and the law abiding citizens.

“The Operation was established in order to restore law and order, extinguished all flames and end all forms of terrorism and criminality in North Eastern Nigeria by kinetic and most importantly non-kinetic operations,” he said.

He added that the operations are being conducted in Sambisa Forest, the Tumbuktu triangle and the Mandara Mountains in protecting people’s lives and property.

He revealed that over 60,300 communities and captives were liberated and rescued from the forest and Lake Chad region.

He also called on remnants of Boko Haram terrorists to come out from their hideouts and embrace the amnesty programme of the federal government,  which is aimed at rehabilitation and reintegration of repentant terrorists back into society.