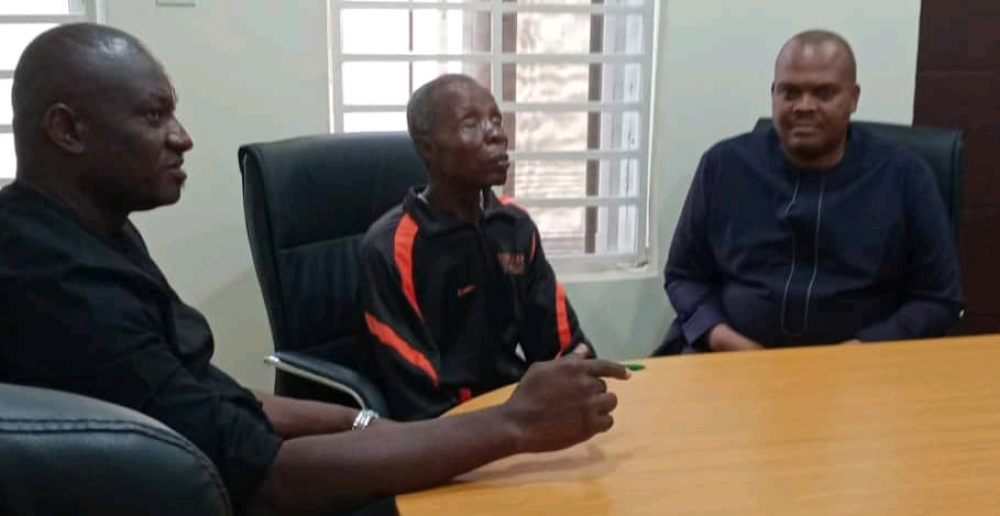 A delegation of the Enugu State government on Tuesday 31 August met with the visually challenged Commonwealth Boxing Gold Medalist from Nomeh in Nkanu East Local Government Area of the state, Stephen Ugboo (middle), in Enugu.

Minister of Youth and Sports Development, Sunday Dare, has initiated moves to rehabilitate ex-boxer Stephen Ugboo after a video, which went viral on social media, showed the blind man begging for assistance from Nigerians.

Ugboo said he is a National Sports Festival (NSF) medalist. The big one: he also claimed he won a gold medal at the 1974 Commonwealth Games in Christchurch New Zealand. However, AllNews cannot independently confirm this as he was not listed amongst Nigeria’s boxing medallists at the said Games.

In the viral video, Ogbo displayed some pictures and medals he claimed to have won for Nigeria in his active days.

Touched by the plight of Ogbo, Dare, in a statement last week, asked for more facts about him so that his claims could be verified and support given to him in line with the welfare programme for former athletes put in place under his leadership since coming on board as minister two years ago.

Nigerians are already coming to the aid of Ugboo with Chairman, Enugu State Boxing Association, Osondu Ogbu, donating the N30,000 after meeting with the said former athlete last Tuesday during the state referees and judges refresher course in Enugu.

Meanwhile, the Enugu State Government has met with the retired boxer on the directive of the state governor, Ifeanyi Ugwuanyi.

The discussion, according to sources, is led by the state Commissioner for Information, Nnanyelugo Aroh and the Chairman of Nkanu East Local Government Area, Abel Nwobodo.

The meeting, according to a statement by Aroh was aimed at seeking the best ways to assist Ugboo overcome his challenges.