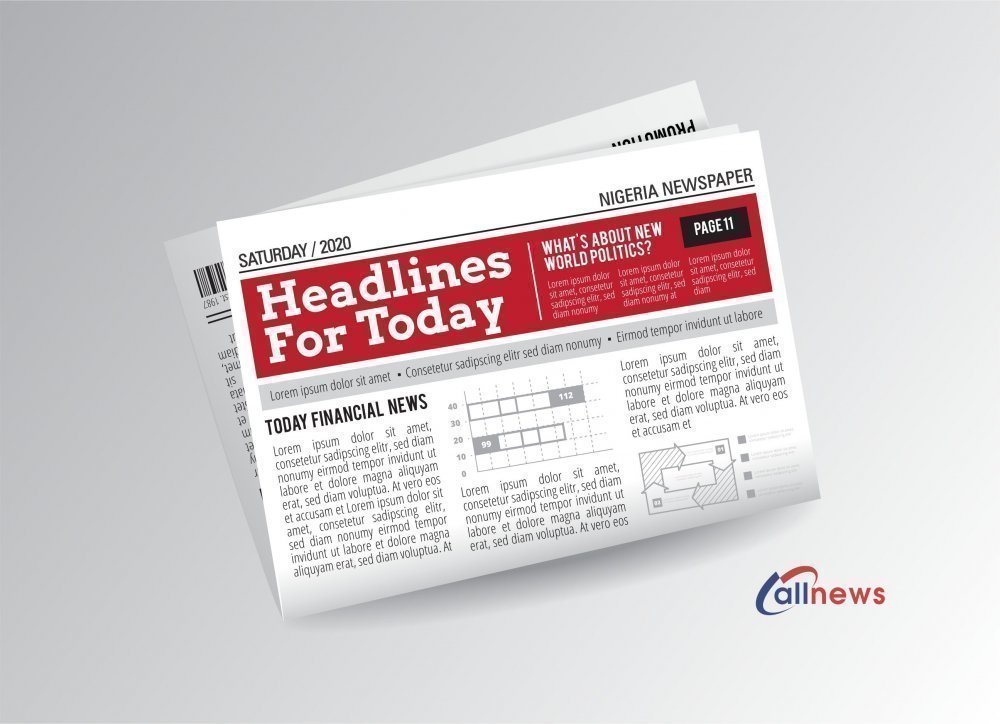 Welcome to the AllNews roundup of the top 10 Nigerian newspapers headlines for today Saturday, February 27th, 2021.

Tesla CEO Elon Musk said in a tweet that it would be "awesome" if the Securities and Exchange Commission decided to probe his tweets that promoted the meme-based cryptocurrency, Dogecoin.

The tech mogul, who is currently the world's second-richest person with a $190 billion net worth—has repeatedly referenced the token in recent weeks via his personal Twitter account, which has a vast reach of more than 48 million followers. Read more here.

Kaduna State Government has announced to the state residents that its Ministries, Departments and Agencies (MDAs) will no longer offer services to any one without the Kaduna Residents Card or the National Identity Number, from May 1, 2021.

This was disclosed by the Executive Secretary of the Kaduna State Residents Registration Agency (KADSRRA), Dr Zayyad Tsiga on Thursday. Read more here.

A popular Kaduna-based Islamic scholar, Sheikh Ahmad Gumi has said that the abductors of female students of the Government Girls' Secondary School (GGSS) at Jangebe town in the Talata Mafara local government area of Zamfara State were not the bandits he recently engaged with in the state's forests.

Recall AllNews had reported that bandits stormed GGSS at Jangebe around 1 am on Friday and abducted over 300 female students. Read more here.

The Ministry of Humanitarian Affairs, Disaster Management and Social Development of Nigeria is quiet regarding a viral report that claims that it has concluded plans to pay N300,000 soft loans to exited Batches A and B volunteers.

AllNews observed that many erstwhile N-Power beneficiaries - who are curiously waiting for what the much-publicised NEXIT has in store for them - are confused about the authenticity of the report. Read more here.

Manchester United forward, Marcus Rashford says because Dean Henderson and Joel Pereira "know me best", it is not easy finding the back of the net against them from 12 yards (in trainings).

The management of the Ladoke Akintola University of Technology (LAUTECH) has remained silent following the viral video of a man said to be one of the lecturers of the institution having sex with a lady alleged to be a student of the same institution that hit the internet yesterday.

It could be recalled that LAUTECH became one of the top searches and trending topics on Twitter on Thursday after a sex tape of an alleged lecturer of the institution hit the internet. Read more here.

One Alhaji Sharafdeen, an ex-husband to Alhaja Kafilat Kaola, has insinuated that the popular radio presenter is a sexual addict.

'Alhaja Kaola' presents the Islamic programme 'Albayan with Alhaja Kaola' on Fresh FM, Ibadan, and has been embroiled in controversy with her former husband. Read more here.

The founder of Mountain of Holy Ghost Intervention and Deliverance Ministry, Onitsha, Chukwuemeka Ohanaemere, alias Odumeje ‘The Lion', says "a serious battle is coming" to Nigeria.

In a video published on Thursday on Holyghost Intervention TV, Odumeje released a new prophecy to Nigeria. Read more here.

President Muhammadu Buhari has said that there will no longer be softening of the ongoing measures aimed at tackling insurgents, bandits, kidnappers and other crimes posing threats to innocent citizens across the country.

The President made the vow on Thursday through his Chief of Staff, Professor Ibrahim Gambari, at a security meeting of the Northern State Governor’s Forum and traditional rulers in Kaduna State. Read more here.

The Fulani Tribe is one of the largest ethnic groups spread over many countries, predominantly in West Africa. They are concentrated principally in Nigeria, Niger, Mali, Senegal, Guinea, and Cameroon. The History of the Fulani in West Africa began in the fifth century A.D. Read more here.