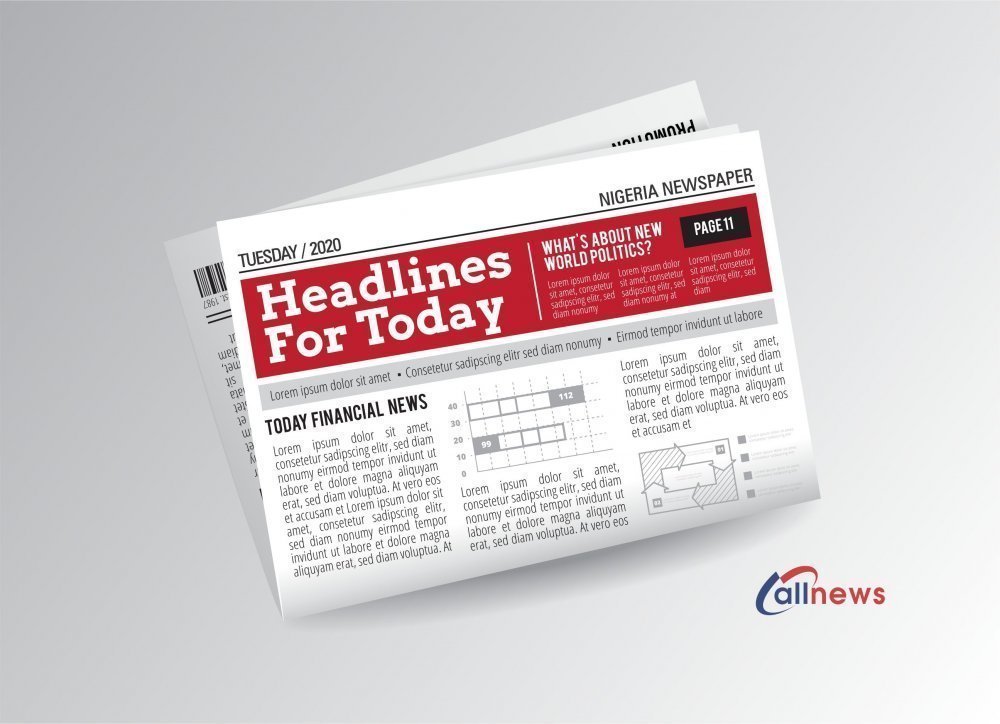 Welcome to the AllNews roundup of the top 10 Nigerian newspapers headlines for today Tuesday, February 23rd, 2021.

MFM FC of the Nigeria Professional Football League (NPFL) has confirmed the appointment of Olalekan Gabriel as its interim head coach.

Ether flash-crashed about 60 percent on the Kraken exchange order book below the $750 mark, around $1,000 less than the true market value earlier today for about five minutes.

It appears Kraken suffered some sort of technical glitch, which caused it to read a significantly lower price compared to its original market value. It is suspected to be a result of the major price corrections in bitcoin and ether, the two largest crypto-assets. Read more here.

The Benue State Governor, Samuel Ortom, has accused his Bauchi State counterpart, Bala Mohammed, of being a terrorist based on his utterances supporting herdsmen carrying AK-47 to defend themselves.

Ortom made this accusation on Monday while addressing journalists in Makurdi, the state capital. He said governor Mohammed must be a terrorist for supporting illegal arms wielding by foreign herdsmen. Read more here.

Justice Chukwujekwu Aneke granted permission following an application by Fayose’s counsel, Ola Olanipekun (SAN). Fayose had through his counsel, sought an order of the court granting him leave "to travel outside Nigeria for further medical examination, diagnosis, treatment, and therapeutics, as an exigency of his health demands, on dates which shall not coincide with or obstruct any date of the trial in this case." Read more here.

Gumi leaked the audio of his conversation with an unidentified army personnel to the former presidential aide, Reno Omokri. Read more here.

Nigerian singer CDQ has slammed the organizers of the 14th edition of the Headies over Mayorkun taking home the Best Street Hop artist award at the expense of Naira Marley.

Mayorkun and Naira Marley were among the nominees in the category, and the Geng crooner went home with the award for Best Street Hop, to the displeasure of CDQ who reacted on Twitter. Read more here.

Ugandan opposition leader, Bobi Wine, has announced on Monday that he was abandoning a legal bid to challenge the results of last month’s presidential election, accusing the judiciary of favoring the veteran ruler, Yoweri Museveni.

The 75-year-old, who was also a former rebel leader, won a sixth term in office on January 14 with 58 percent of the vote. Wine, a 39-year-old singer-turned lawmaker, became second with 35 percent in the election he had described as sham. Read more here.

8. Woman Seeks Divorce Over Husband’s Inability To Impregnate Her

A 30-year-old housewife, Marwanatu Muhammad on Monday prayed a Shari’a court sitting in Rigasa, Kaduna State, to dissolve her 10-year-old marriage to Iliyasu, for his inability to impregnate her.

In her petition, Muhammad alleged that Iliyasu has not gotten her pregnant since they got married in 2011. Read more here.

Samsung has officially announced that Galaxy Watch Active 2 and Galaxy Watch 3 owners can now enjoy the smartwatch for blood pressure check and Electrocardiography (ECG) measurement. These features will be available to those who live in one of the 31 countries which Samsung confirmed would be getting this month.

10. Why Adesua Etomi, Banky W Should Be Given The 'Private Couple' Award

It’s just February but the award for private celebrity couple of the year should be handed to Adesua Etomi and her husband, Banky Wellington.

Today is Etomi’s birthday and her husband has decided to drop the bomb on us. They both welcomed a baby boy four weeks ago. Read more here.