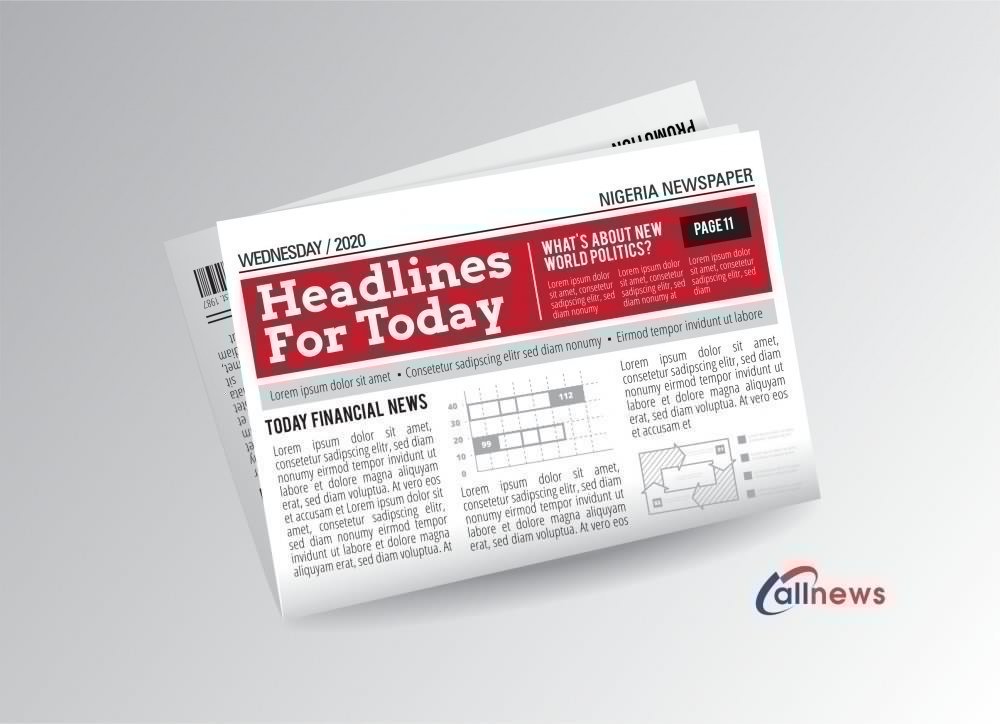 Welcome to the AllNews roundup of the top 10 Nigerian newspapers headlines for today Wednesday, January 20th, 2021.

Dangote Group has completed the construction of Nigeria’s longest rigid pavement in Kogi State. The construction is the first of its kind, top engineers agree.

The 43-kilometre Obajana-Kabba road, built by Dangote Industries Limited (DIL), has been described by motorists as the country’s most strategic highway in aiding travellers between the North and the South. Read more here.

Kola Ologbodiyan, the National Publicity Secretary of Peoples Democratic Party (PDP) has advised Rochas Okorocha the former Imo Governor against forming a new political party ahead of the 2023 general elections.

Making this call during a session with Journalist in Abuja on Tuesday, Ologbodiyan advised the former Governor to join PDP instead of forming a new political party. Read more here.

The Independent National Electoral Commission (INEC) has announced the date for the conduct of the Anambra state governorship election.

Announcing the date for the governorship election in a statement by Festus Okoye the National Commissioner for Information and Voters Education, INEC revealed that the governorship poll has been fixed for November 6, 2021. Read more here.

Yerima Shettima, the leader of Arewa Youth Consultative Forum (AYCF) has insinuated that Nnamdi Kanu, the diaspora-based leader of the Indigenous People of Biafra (IPOB), does not have the right to form a security outfit.

Shettima, in a recent interview with Sun News Online argued that Kanu and IPOB, in the first place, "should not even be talking", being an outlawed group. Read more here.

5. Biden Inauguration: Facebook Suspends Ads For Weapons In US

Facebook in its bid to stage a crackdown on potential domestic terrorism at President-elect Joe Biden’s inauguration, the social network has temporarily banned US ads for gun accessories and military gear.

The Olowo of Owoland, Oba Ajibade Ogunoye of Ondo State has lauded Governor Rotimi Akeredolu, for ordering herdsmen to vacate all the forest reserves in the state.

The Monarch disclosed this in a statement issued by his Chief Press Secretary on Tuesday. Read more here.

Nigerian singer, Waje, has finally revealed the face of her lover. The single mother of one took to Instagram to show off the man after her heart with a cosy picture of her wrapped around him and a simple caption, ‘It’s Time’

Since she posted the picture, her celebrity fans have flooded the comment section with congratulatory comments. Read more here.

8. Why Border Closure Is Good For Nigeria’s Security — Babandede

Mohammed Babandede, the Comptroller General of the Nigerian Immigration Service (NIS) on Monday said the closure of Nigeria's borders is good for the nations' security.

AllNews had reported that President Muhammadu Buhari ordered the immediate reopening of the borders on December 16, 2020, after closing it on August 2019 to curtail the illegal importation of drugs, small arms, and agricultural products into the country. Read more here.

Real Madrid has pre-agreement to sign Bayern Munich defender, David Alaba after his contract expires in the summer of 2021 as a free agent.

Alaba 28, spent most of his trophy-filled career at Bayern Munich winning two continental trebles with the Bavarians. His contract winds up in June 2021. Read more here.

10. 2023 Election: Okorocha, Others To Set Up New Political Party

The former Governor of Imo state, Rochas Okorocha has revealed that he and some other unnamed politicians are planning to set up a new political party ahead of the 2023 general elections.

Making this revelation while speaking to journalists on Monday, Okorocha explained that the All Progressives Congress (APC) was formed in a hurry to unseat the then ruling Peoples Democratic Party (PDP). Read more here.