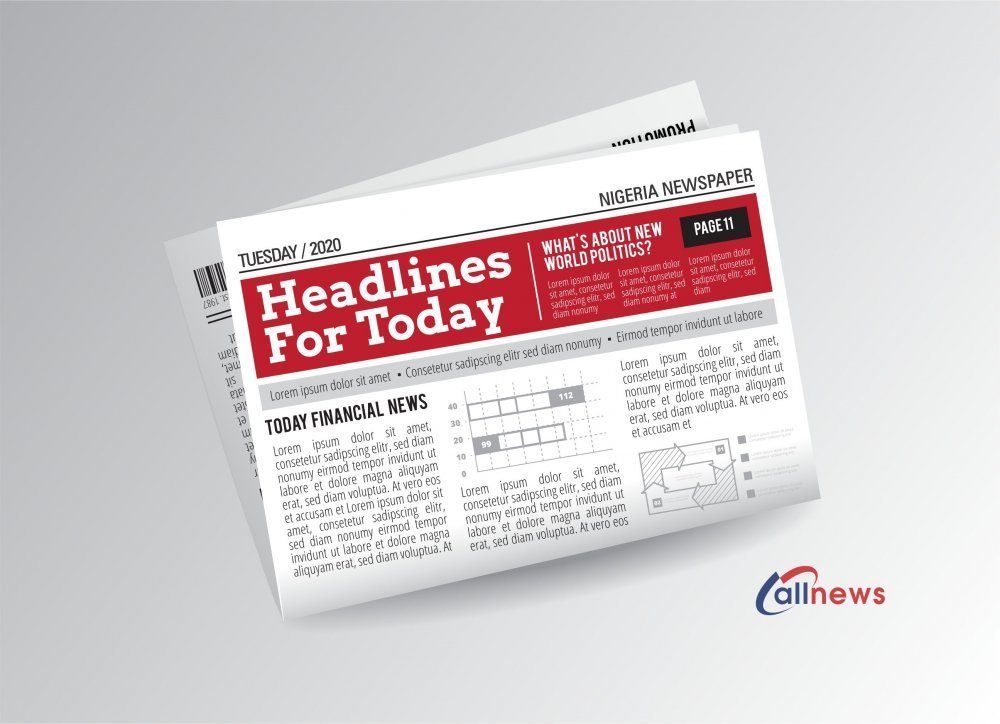 Welcome to the AllNews roundup of the top 10 Nigerian newspapers headlines for today Tuesday, December 1st, 2020.

Abdulrasheed Maina has been arrested in Niger Republic.

AllNews understands that operatives of intelligence service in a collaboration with men of anti-corruption agency in Nigeria on Monday evening, arrested Abdulrasheed Maina, in a town in Niger Republic. Read more here.

The Nigerian Bureau of Statistics (NBS) has disclosed that while consumption in Nigerian households dropped between April to June 2020, the consumption level of the Nigerian government rose 152.05% - this shows the disparity of living between the citizens and the government.

Following the killing of 43 rice farmers by men of the Boko Haram sect on Saturday, the governor of Borno State Babagana Zulum has advised President Muhammadu Buhari to recruit mercenaries to help push out Boko Haram from Sambisa forest.

Zulum who gave this suggestion on Monday while the Federal government delegates visited the state also asked President Buhari to immediately engage the service of neighbouring countries like Cameroon, Chad and Niger republic to help clear the remnant of Boko Haram hiding at the shore of Lake Chad. Read more here.

New findings by BudgIT Nigeria, a budget tracking company, has shown that President Muhammadu Buhari-led administration controversially labelled meetings, celebrations and anniversaries as Capital Project in the 2021 Budget which is set to gulp about NGN13.08 trillion.

Nigerian superstar  and songwriter Ayodeji Balogun, aka Wizkid has created history by becoming the first Nigerian act to win the BET soul train award for the second time. The event took place on Sunday and was filmed in several locations and virtually aired on BET.

The news of Wizkid’s victory broke on the internet after @Soultrain took to their Twitter account to announce the winner of the award for the song 'brown skin' with Beyoncé, Blue Ivy and Saint JHN in collaboration. Read more here.

Bianca Odumegwu-Ojukwu, the wife of former 'Biafran President', Chukuemeka Odumegwu Ojukwu has said that agitations for the secession and sovereignty of Eastern Nigeria are likely to be relentless because the Nigerian situation "does not accommodate the legitimate aspirations of its component groups", AllNews reports.

Mrs Ojukwu, a former Nigerian ambassador to Spain made the comments on Thursday, November 26 at an event in Owerri, the Imo State capital. Read more here.

The Nigeria Police Command in Abuja on Sunday arrested one of its personnel whose face was seen in a viral video that surfaced on social media on Saturday.

AllNews gathered that the Police Public Relations Officer (PPRO), Yusuf Mariam, made this known in a statement on Sunday. Read more here.

Following the meeting reported earlier to take place today (Monday), the Senate of the University of Ibadan has made their decision by electing Prof. Adebola Babatunde Ekanola as the new Acting Vice-Chancellor (VC) of the university.

Findings have revealed that the importation of palm oil has soared by 24.5 percent despite the restriction placed by the Federal Government on the edible product.

This is according to recently-released data provided by the United States Department of Trade (USDT) which further revealed that the country imported about 1.2million tons of crude palm oil valued at N368.8billion between 2018 and October 2020. Read more here.

The President of the Nigerian Senate Ahmad Lawan has on Monday led a delegate of the federal government to Borno State in the aftermath of the Zabarmari massacre that saw 43 rice farmers beheaded by Boko Haram.

Also part of the delegate of the Federal government to Maiduguri, the Borno State capital, was the Chief of staff to President, Ibrahim Gambari, Minister of Communication and Digital Economy Ali Pantami, amongst others. Read more here.