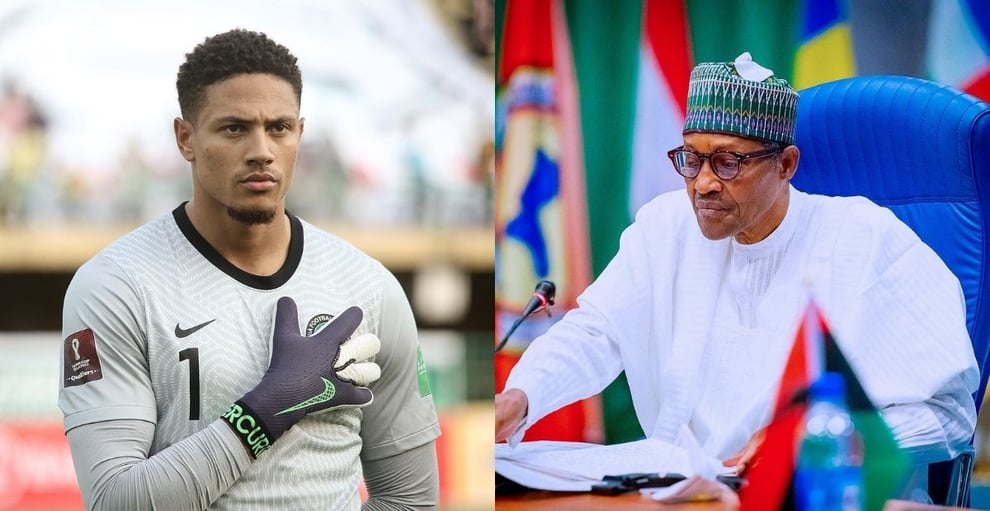 Nigerians have directed their fury at Maduka Okoye and President Muhammadu Buhari over the sorrowful elimination of the Super Eagles at the African Cup of Nations (AFCON).

On Sunday, Tunisia stunned the Super Eagles of Nigeria with a 1-0 win to send Augustine Eguavoen's men home from AFCON.

However, on a lighter note, Nigerians blamed Buhari for calling the Super Eagles ahead of the game.

Super Eagles goalkeeper Maduka Okoye also shared in the blame as it was stated that the goalie was carried away by the flood of ladies pining over him on social media over his good looks.

It was also stated that the hot goalkeeper only wanted to maintain his 'fine face' and was uninterested in manning the goal post.

If you let Nigerian girls enter into your head too much, you’d get distracted. Ask Maduka Okoye.

Buhari called Super Eagles and everything turned upside down for super eagles.

It’s also imperative to note that the Super Eagles are losing for the first time in this tournament after President Buhari spoke to them via Video Call...

I prefer not to speak?

#SuperEagles played very well today but that terribly dangerous call from Mr. FAILURE @MBuhari was the problem. buhari is bad luck personified, if you doubt me ask The people of Nigeria.May Buhari never happen to you! #RevolutionNow #WeCantContinueLikeThis #AFCON2021 pic.twitter.com/rVCKsSka2g

Super Eagles should have told Buhari that NO NETWORK and use style reject his call ooo. Anthony Joshua hasn't recovered from his own encounter. ? pic.twitter.com/xI4pbACh6F

Iwobi sent off. Nigeria down to 10 men & trailing behind Tunisia by 1 nil.

Did Buhari actually call the Super Eagles on video before the match? ??

*May buhari never called you in Jesus name.*

What do you think caused Nigeria to lose against Tunisia??#Nigeriavstunisia Buhari Okoye #AFCON2021