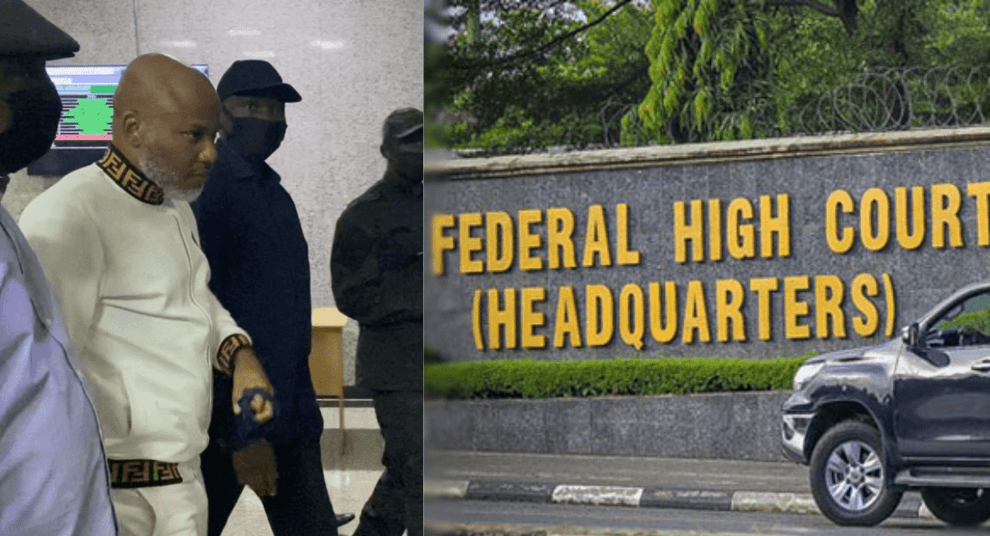 Igbo youths under the aegis of Coalition of South East Youth Leaders (COSEYL) have condemned the refusal of an Abuja Federal High Court to grant the leader of IPOB, Mazi Nnamdi Kanu bail.

The youths expressed sadness over the dismissal of the bail application describing the verdict of the court presided over by Justice Binta Nnyako, as ” injustice against humanity”.

In a statement signed by its President General, Comrade Goodluck Ibem, the group said the court verdict was not different from the remarks by President Muhammadu Buhari.

The statement reads in part: “The verdict of Justice Binta Njako is the same statement made by President Muhammadu Buhari on Thursday 23 June 2022 during a bilateral meeting with the Prime Minister of Britain, Boris Johnson, on the sidelines of the 26th Commonwealth Heads of Government Meeting (CHOGM) in Kigali, Rwanda where the President Buhari told the PM Johnson ‘remember he jumped bail before, how are we sure he won’t do it again if he’s admitted to bail?

“President Buhari even went further to say he was arrested based on the things he said against his person, meaning that the entire exercise is a gross personal vendetta.

“When did the statement of the President become the verdict or judgement of the court? Are we running a democratic government or a Unitary system of Government where only one man determines the fate of millions of Nigerians even when it is unconstitutional, undemocratic and inhuman?

“The Presidential system of Government which we are practising in Nigeria and is enshrined in our constitution made it explicitly clear that there is the separation of powers between the three arms of Government.

"No arm is higher in authority than the other. The three arms of Government have equal rights and no other arm can dictate for the other.

“But what we saw today in court in the case of Mazi Nnamdi Kanu shows that President Buhari now dictates the verdict of the court.

“Our hard-earned democracy brought to us by our founding fathers has been reduced to nothing with what we saw today.

“The Judiciary all over the world is the last hope of the common man, but what happened in court today where the statement of President Buhari made some days ago in Kigali, Rwanda suddenly became the verdict of the court in a supposed democracy leaves much to be desired.

“Indeed our democracy has been battered and destroyed through the Judge who is meant to uphold the law no matter whose ox is gored.

Igbo youths insisted that Kanu did not jump bail but only had to flee for his life following the military raid of his home in 2017.

“For the records, Nnamdi Kanu did not jump bail, he only left to stay alive when the Nigerian army came to his house to kill him and his entire household.

“Over 70 Igbo youths were killed on that day the Nigerian military invaded his house. The law of self-preservation permits him to do whatever he can to stay alive. He did not jump bail.

“We call on the international community, the United Nations and all lovers of democracy and justice to come to the aid of Nigerians whose hard-earned democracy is now on the balance.

“The democracy our founding fathers fought so hard and made sacrifices to bring to us is threatened.

“The denial of Nnamdi Kanu’s bail and adjournment of his case by Justice Binta Njako to November 14, 2022, despite his ill-health even when he is constitutionally guaranteed to be granted bail is inhuman and grossly against his fundamental human right to life.

“The present health condition of Nnamdi Kanu is life-threatening and it is his fundamental human right to be granted bail in other to take care of his health.

“We call on the Judiciary to look at Nnamdi Kanu’s case based on its merit and not based on sentiments because what we saw today to us is not justice but gross personal vendetta in action.”