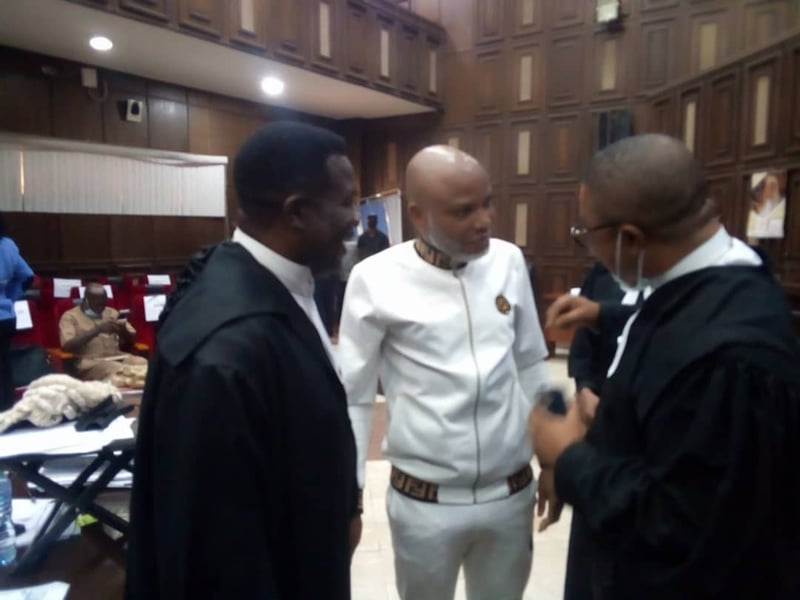 Kanu, through his team of lawyers led by a Senior Advocate of Nigeria, Chief Mike Ozekhome, further accused the government of denying him the necessary facility to defend the charge against him.

Ozekhome, SAN, told the court that the amended charge was served on them, barely 24 hours to the scheduled hearing.

Defence Counsel to the leader of the IPOB, Ozekhome objected to the accused Nnamdi Kanu, taking a plea bargain.

"My lord, the proposed amended charge was served on us yesterday evening. As I speak to you my lord, the Defendant who was just brought in has not even seen the charge which he is being told to enter his plea.

"With due respect, that is not justice. It is ambushing. I know that the Administration if Criminal Justice Act, ACJA, allows them to amend, but this is the 6th amendment they are making, and each time they do it, they serve us a day to the hearing, just to frustrate the trial", Ozekhome added.

On his part, the prosecution team led by Mohammed Labaran from the Federal Ministry of Justice said he was not opposed to the court granting a short adjournment to enable the defence lawyers to study the charge.

Meanwhile, before adjourning the case till Wednesday, trial Justice Binta Nyako ordered the Department of State Services (DSS) to allow Kanu to have a change of clothes, as well as grant him the freedom to exercise.