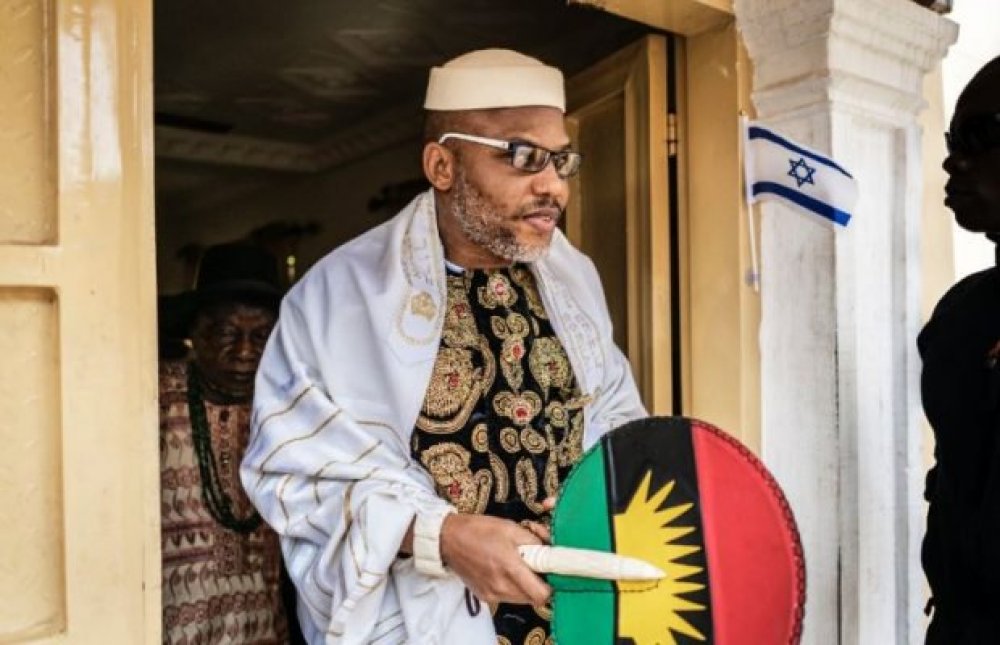 The family of the leader of the outlawed Indigenous Peoples of Biafra (IPOB), Nnamdi Kanu, on Tuesday insisted on explanations on how their blood was allegedly “abducted and bundled” back to Nigeria.

This demand manifested as traditional rulers under the aegis of Monarchs of Biafran Land came to Umuahia, Abia State on solidarity visit and advised the Federal Government to employ dialogue in Kanu’s matter.

Speaking during the occasion, Kanu’s younger brother, Emmanuel Kanu, said that the family was still in the dark on how the 54-year-old was “abducted in Kenya and brought to Nigeria”

According to Emmanuel, the Kanu family would not attend any court hearing against the lead Biafra agitator unless it was explained to them how disapora-based Kanu was rearrested in Kenya, and who his captors were or working for.

“We won’t be in court on 26th July until they explain to us how and who kidnapped Nnamdi in Kenya.

“We need clarifications on what happened and how he was brought to Nigeria illegally.

“Even Britain, whose citizenship he holds, said it needed explanations on what happened. So, we need to know what happened,” Kanu's family said.

Meanwhile, the International Human Rights Commission (IHRC), based in Geneva, Switzerland, has cleared Nigerian and Kenyan authorities of diplomatic breaches in the arrest and repatriation of Kanu to Nigeria.

At the same time, the IHRC has admitted receiving no fewer than 25 petitions from individuals and groups worldwide in respect of the IPOB leader, who is to stand trial over an alleged treasonable felony.

The international human rights body said in a statement dated July 7, 2021, that majority of the petitions, which came from Nigeria, urged it to conduct an independent inquiry into human rights violations and possible breaches to established international and regional diplomatic protocols.

The statement which was signed by the IHRC’s Special Envoy for Africa Region, Evans M. Mutavi, and International President for Kenya, said that it accordingly, conducted an independent investigation into the matter and found out that there was no violation of Nnamdi Kanu’s human rights in the events leading to his re-arrest and repatriation to Nigeria.

“The IHRC is committed to safeguarding the rights of citizens across the globe in line with the organization’s core mandate,” the agency said.

“The commission upon investigation is unable to establish a case of human rights violation of Nnamdi Kanu in Kenya by the special Police Forces.

“The Commission is convinced that the Kenyan Government played no official role in the event that led to Nnamdi Kanu’s arrest.

“The Commission expects the Nigerian Government to follow up the trial of Nnamdi Kanu in line with the country’s laws and respect to human rights.

“The commission has resolved to monitor the trial of Nnamdi Kanu to ensure his human rights are not violated by the Nigerian Government,” the IHRC stated.