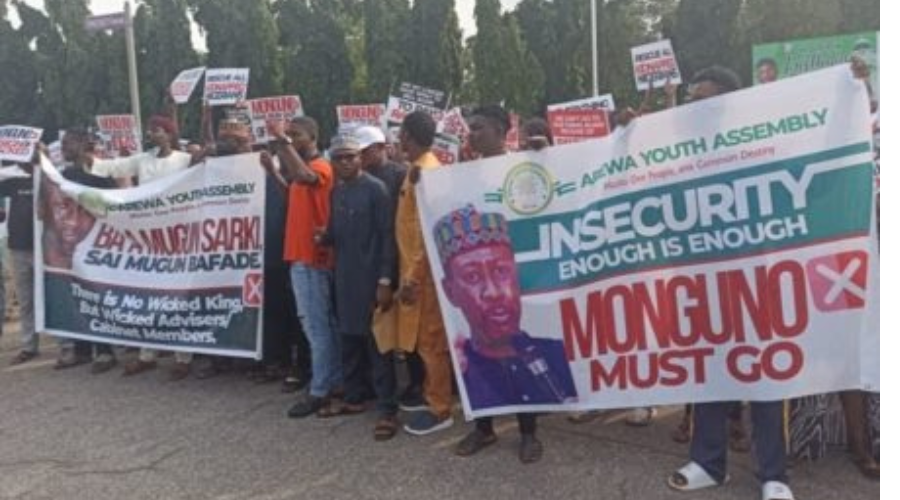 Northern youths under the aegis of Arewa Youth Assembly (AYA) staged a protest on Wedesday in Abuja at the National Assembly to demand the resignation of the National Security Adviser (NSA), Babagana Mungono over the worsening insecurity in the country.

The northern group had on Sunday announced in a statement that they will be protesting on 17 August, asserting that for the past seven years Mungono was appointed to the sensitive position of NSA, the security situation in the country has been abysmal, as terrorists and other criminal elements unleashed havoc on Nigerians.

Following their demand, the group converged at National Assembly with placards having inscriptions like, “Rescue all kidnapped Nigerians”, “Monguno resign or be sacked”, and “We are tired of every second killing”, among others.

The group has threatened to return to the street of Abuja if after two days President Muhammadu Buhari fails to grant their request, adding that the protest will continue, not only in Abuja but in all the 19 Northern states.

Arewa’s demand followed the series of terrorist attacks witnessed across the federation in the past months.

"That the security of this nation should unconditionally be improved from its present state to a satisfactory one.

"That all Nigerians in captivity should be fought for and set free, unconditionally.

"We urge Nigerians to keep faith with us as the path towards the redemption of our country has just started."