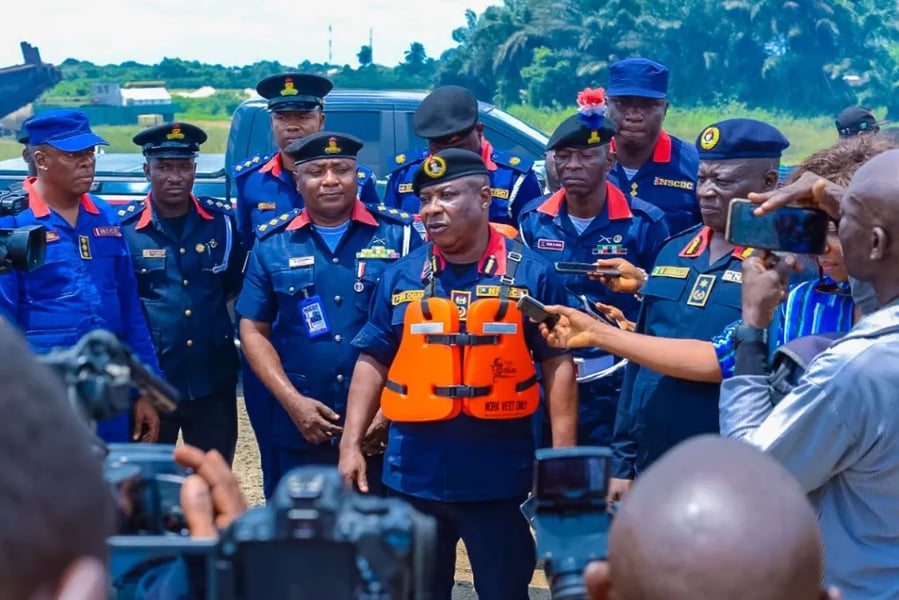 19 individuals have been detained by the Nigeria Security and Civil Defense Corps (NSCDC) on suspicion of bunkering and illegal crude oil refining in Rivers.

They were apprehended at various locations during the command's raid operations in the state, according to Micheal Ogar, the NSCDC Commandant in Rivers, who paraded the suspects before newsmen in Port Harcourt on Monday.

Ogar pointed out that individuals stealing the nation's money through shady oil deals have shamelessly refused to alter their behaviour despite ongoing sensitization efforts and a relentless campaign against economic sabotage.

He insisted that following the reorganisation of a new Antivandal Team of the Command, the marine and land patrol operatives had begun full operations with a renewed vigour, professionalism, and tactics in waging war against the threat of vandalism of oil pipelines and oil theft in Rivers State.

He claims that the destruction of illegal artisanal refineries, bunkering locations, and the arrest of suspects have given the populace newfound confidence.

“Our tactical teams on land and waterways have arrested several suspects with the help of credible information about the activities of illegal bunkers.

“In our latest operations, we arrested 19 suspects engaged in illegal bunkering offences in different locations in Rivers state.

“The state government has been fighting oil theft, and we are here to support both the Federal Government and the Rivers Government, to eliminate illegal bunkering from the state,” he said.

He said that the command was totally committed to carrying out the government's directive to put an end to crude oil theft, illegal petroleum product refining, and damage to vital oil and gas installations.

“So, we warn those still indulging in illegal bunkering to desist forthwith and engage in legal businesses as there is no hiding place for them in Rivers.

“We are ready to go after them, smoke them out wherever they are hiding and bring them to justice,” he added.

Insisting that their identities would be kept secret, the commandant invited anyone with useful information regarding the locations of illicit bunkering sites and refineries to come forward.

One of the accused, Mba Ojima, and his group were detained as they tried to deliver illegally refined fuel to a filling station in Port Harcourt so that it could be sold to drivers there.

Chijioke Dennis, a 28-year-old suspect, claimed to have been detained at 3 a.m. on Thursday, with contaminated petroleum products in his possession.